WoodDraw wrote: ↑
Fri Sep 27, 2019 1:47 pm
I can't figure out what he wants to accomplish yet. Every mayor wants a legacy. The only one in recent memory that hasn't is funk.

It's so early that I'm not saying anything, but I find his public face a bit odd so far.

I think he wants to fix crime and the schools then maybe come back to pro development? If this ends up being a bad term, we can just all blame Jason Kander cause he was pretty much guaranteed the victory

And I want to fix world poverty and have everyone retire at age 40.

I don't mean to be crass, and I take Dave's point, but like what are his deliverables?

It's impossible to judge someone, for better or worse, until I know what they're trying to accomplish.
Top

WoodDraw wrote: ↑
Fri Sep 27, 2019 1:47 pm
I can't figure out what he wants to accomplish yet. Every mayor wants a legacy. The only one in recent memory that hasn't is funk.

It's so early that I'm not saying anything, but I find his public face a bit odd so far.

I think he wants to fix crime and the schools then maybe come back to pro development? If this ends up being a bad term, we can just all blame Jason Kander cause he was pretty much guaranteed the victory

And I want to fix world poverty and have everyone retire at age 40.

I don't mean to be crass, and I take Dave's point, but like what are his deliverables?

It's impossible to judge someone, for better or worse, until I know what they're trying to accomplish.

Here's a list of some promise's he's made... https://www.kshb.com/news/kcmayortracker

Two big ones he's hammered upon a lot are getting the homicide count below 100 and implementing fareless transit.
Top

There's not much room for nuance when, "Let's try to focus on small projects that provide real value to the people instead of lavish incentive packages that mostly provide value to the developer..." == ANTI ALL DEVELOPMENT, ANTI ALL PROGRESS, HATES CAPITALISM
Top

While I agree there is some consolidation of power going on by Lucas, the Strata deal itself is one where the developer is asking for the general fund to backstop a parking garage. Thats not something I support. If the deal didn't have any city guarantee I'm still not supportive of subsidizing parking, but would generally not be against the deal. So basically, I'm not opposed to playing hardball against Strata.

Largely I agree with what Dave said- the council probably isn't as anti-development as they are made out to be. That issue aside, the power structure in this council is weird. It is partly because there are a lot of people who aren't used to being in control, but rather are used to just throwing stones at those who are making decisions. Now that they're the ones making decisions they don't really know who to throw stones at. It makes it seem (to me) that there isn't any direction for the current council. Development takes someone to a champion an idea. No one seems willing to relinquish their stone throwing posture and take on the champion posture. I think thats why he/council get the anti-development wrap. It may be unjustified. But until someone leads, it won't go away.

As for the Central City Sales tax, that was going to happen regardless of Lucas being elected, so I don't give him credit for any of that. And really, there are a couple of things going on that are pre-Lucas that he will get credit for, but really shouldn't. Thats probably typical and certainly doesn't bother me. What I'm really interested in seeing though, is what he wants to do going forward. I haven't really heard a consistent answer on that yet. I've heard a bunch of different ideas from him, but nothing has been acted upon or has any substance. And if you've watched any committee meetings thus far, they seem to operate in disarray. Nobody is on the same page. I put that on the Mayor.

Additionally, the city is undergoing a massive staff leadership change. Some of it was going to happen regardless of who was elected because so many people are due to retire. But some of it is also related to Schulte leaving and the new council. The turnover and newness of staff leadership will naturally cause some slow downs and possibly even disfunction.

All this together makes it seem like nothing of consequence is getting done at city hall and nothing appears to be on their radar going forward.

I will be very interested to see how this next budget turns out.
Top

Indeed. Outgoing City Manager and incoming Mayor trying to collaborate and a not-yet-stable Council expected to approve the output in short order.
Top

mean wrote: ↑
Fri Sep 27, 2019 3:00 pm
There's not much room for nuance when, "Let's try to focus on small projects that provide real value to the people instead of lavish incentive packages that mostly provide value to the developer..." == ANTI ALL DEVELOPMENT, ANTI ALL PROGRESS, HATES CAPITALISM

Not sure that's it, and I don't grant the premise. Where are all these small projects? And why can't we do both at the same time?
Top

It feels from the meetings I’ve seen that Lucas is trying to defer to Ellington in a lot of ways. He’s trying to raise hell at all turns to get credibility and Lucas is trying to build a coalition with him instead of cutting him loose like he should. I think he knows he can’t win re-election without the east side. So, the narrative has seemed anti-DT. Look for someone like Phil Glynn to be the next city manager.

The problem is the last ten years has seen development on the east side specifically because the rest of the city is getting more desirable. It’s also growing jobs giving more people access in the east side. If you focus exclusively on the east side Like we have done repeatedly. I don’t see to many people going there. You are talking about an increasingly dwindling population with little financial resources, they will be helped by having more access to jobs and housing credits to keep them where they are.
Top

If Kansas City could get its' murder rate down to at least 10 murders per 100,000 people per year, development and investment would happen much faster east of Troost. It affects the perception of the entire city though.

That rate would still be higher than what both New York and Los Angeles have now. Getting the overall crime rate down citywide would be great. However,the murder rate certainly scares people off. A lot of people still won't drive east of Troost, or invest there. That has to change, because east of Troost is a huge geographic area. You could physically fit St. Joseph, Missouri in that acreage of KCMO that exists east of Troost. I think you could also fit the City of San Francisco in that area.

High crime rates are a primary reason many retail businesses won't go there. It's why many grocery stores aren't there. There are no movie theaters in KCMO south of the river that are east of Troost. None. There are no shopping malls there. No Sears, Kohls, Targets, Walmarts, Dicks Sporting Goods, JC Penneys, or Petsmart.

Below on the map the circle indicates a large area without a theater. That area is much larger than San Francisco. 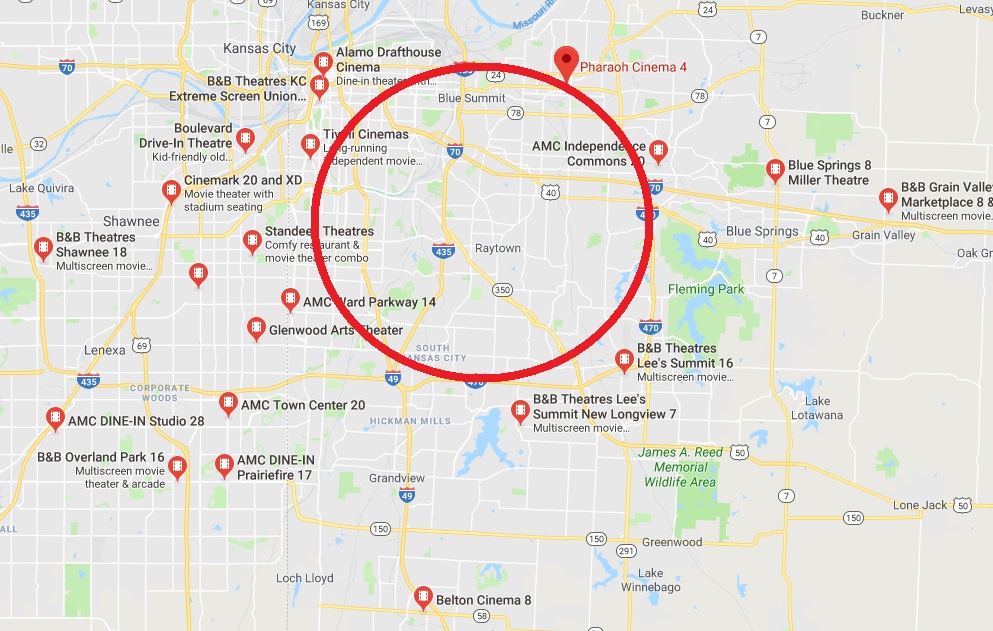 What you have is a very large section of the city that isn't able to function economically. It isn't just lack of places to shop. It's lack of jobs in the neighborhood to employ people to staff the businesses. Those residents have to travel to Independence and Lee's Summit to shop. Think of all the revenue that Kansas City loses.

Miami used to be called the murder capital in the 1980s with almost 300 murders annually.

I don't think anyone disputes that. The question is what actionable steps are you going to take so that we can judge that you're successful.

Everyone says focus on the east side but I still don't know what that means.
Top

Accurately identifying the source(s) of the murder rate problem would also be an important start (for a new mayor wanting to reboot). Drug trade/usage? Lack of value for human life and basic civility? Gun culture mentality? Too many [with xyz attributes] concentrated in a large area? Emotional downward spiral? Dependency on "the system"?

Need to generally define the most common sources of issues before throwing out random "solutions" based on perceptions. If KC doesn't understand it correctly (well directionally correct), probably can't improve anything long term.

OTOH it could be hard to get those in power to take action to agree on the sources and experimenting with various solutions might be the only way and see what sticks. Also could look at other cities that have consistently improved murder rate (like Miami) and what actions they took, what worked and didn't.
Top

1. Police-side aspects like method of policing, recruitment efforts and what focuses they have

An interesting question I've always had is do we focus on east side crime at the expense of larger problems? Are elder abuse, road rage and corporate negligence being ignored because we've focused on violent crime? If the force chose to treat all crimes equal and not say that a certain part of town is inherently more untrustworthy would people act different?

If the police force was ~30% black rather than ~10% black would there be more inherent trust in the force?

If the police rode around on the bus as part of a daily walking routine would crime go down because the police become more approachable?

2. How does codes enforcement get involved? It shouldn't take months or years to shut down an illegal club or motel that enables drug deals. Accelerating enforcement of these situations has to play a part in some way.

The broken window theory isn't completely valid for it's part in crime, but it does set the tone for the whole community. People who care about crime also care about their physical environment. Trash, painting, mowing and the like all play a part in the big picture.
Top

This administration seems to be very quiet so far. What are they working on?
Top

I guess that’s better than what I anticipated them doing. Shake away!
Top

I guess that’s better than what I anticipated them doing. Shake away!

The entire Parks board has been replaced. I’m sure more are to follow.
Top

So what is the flavor of the new members?
Top


...
Former Councilwoman and attorney Alissia Canady was nominated to be the TIF Commission chairwoman. The current Council members nominated are Lee Barnes, Ryana Parks-Shaw and Andrea Bough.
...
The mayor’s other two nominees to the TIF Commission are Tammy Queen, who is the interim City Finance Director, and Clay County Commissioner Pam Mason.
...
And in a rebuff to his predecessor, Mayor Sly James, Lucas has nominated businessman Phil Glynn to be an alternate member to the TIF Commission. Glynn also was an unsuccessful mayoral candidate in the last election.
...
The other alternate members nominated by Lucas are: Andrea Dorch, Bobby Hernandez, Michael McGee, Matt Oats and Jeffrey Williams.
...

I fear a near Funkhowser freeze coming to DTKC development. DT is, and always should be, the economic engine for this area. We cannot lose the momentum already created under the leadership of Sly. Someday we may not need TIF, as for now I feel we still do. I am a 56 year old northlander who is enjoying a vibrant DT for the first time. I only hope to GOD they will at least use TIF for Strada, other OFFICE towers and to finish off Cordish! DAMN!!!
Top
Post Reply
644 posts