Discuss items in the urban core outside of Downtown as described above. Everything in the core including the east side (18th & Vine area), Plaza, Westport, Brookside, Valentine, Waldo, 39th street, & the entire midtown area.
Post Reply
14 posts • Page 1 of 1

A new apartment building project, called Mirabelle, will be built in two phases on the block bounded by 45th Street, 45th Terrace, Wornall and Broadway.

Plaza apartment project will include 70 units next to Saint Luke's

Phase I looks like the exterior is nearing completion: Thanks for the photos.
Top

I tweeted your pic. Hope you don't mind!
Top

How many parcels will be left in or near the plaza once all of the proposed buildings are built?
Top

Riverite wrote:How many parcels will be left in or near the plaza once all of the proposed buildings are built?

Well two of the big, prominent development sites are the former Colonial Courts site and the former Nelle Peters Apartments site. I believe both are owned by Price Brothers.

There is also the long and somewhat narrow lot on 46th Terrace east of Pennsylvania. That has pretty steep grading and might be tricky to develop.

A little further out from the Plaza you have all of the lots that St Luke's owns and the lots owned by American Century.

I just remembered hearing the tale of what might be behind the development across the street from the Tudors. Maybe about 3 years ago a little further north of the Plaza (maybe 43rd Terrace and Pennsylvania) there was a small development being built. The foundation was poured and framing began, but then the structure was torn down. I heard that St Luke's wanted the land and exchanged another parcel they owned for it. I think this is the lot across from the Tudors. And the developer behind that project was a former Royal. I can't recall who it was, but I think it was some random person from the mid 2000s like Emil Brown.
Top

Those are real pretty but I am not sure about all that gray.
Top

Darlene wrote:Those are real pretty but I am not sure about all that gray.

They would look better with that green siding they used in Beacon Hill.
Top

I do think some color would be better, yes.
Top 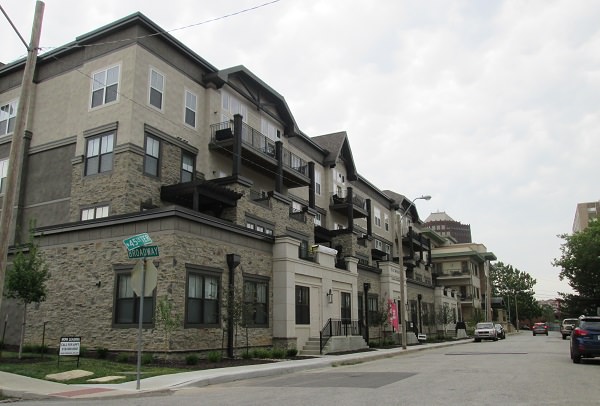 (Sung to the tune of Evacuation by Pearl Jam)
Top

The last remaining home of the Mirabelle II site had been demoed and site work is happening.

Pardon the pun, but it appears that Pulse Development does still have a heartbeat. I wonder if we will hear any news about their other development proposals.
Top
Post Reply
14 posts • Page 1 of 1