Want to talk about your favorite places besides Kansas City? Post any development news or questions about other cities here.
Post Reply
12 posts • Page 1 of 1

This is a massive, $1.2 Billion development by Good Developments Group, which was recently founded by former employees of JDS Development Group of New York. Plans call for office, residential, retail, entertainment, green space, industrial, and parking all on in an 80-acre district south of Downtown St. Louis. Conceptual architecture design is by Henning Larsen of Copenhagen Denmark.

The timeline for construction is 10+ years and supposedly the development team already has some tenants signed on for 400,000sf of new industrial space. 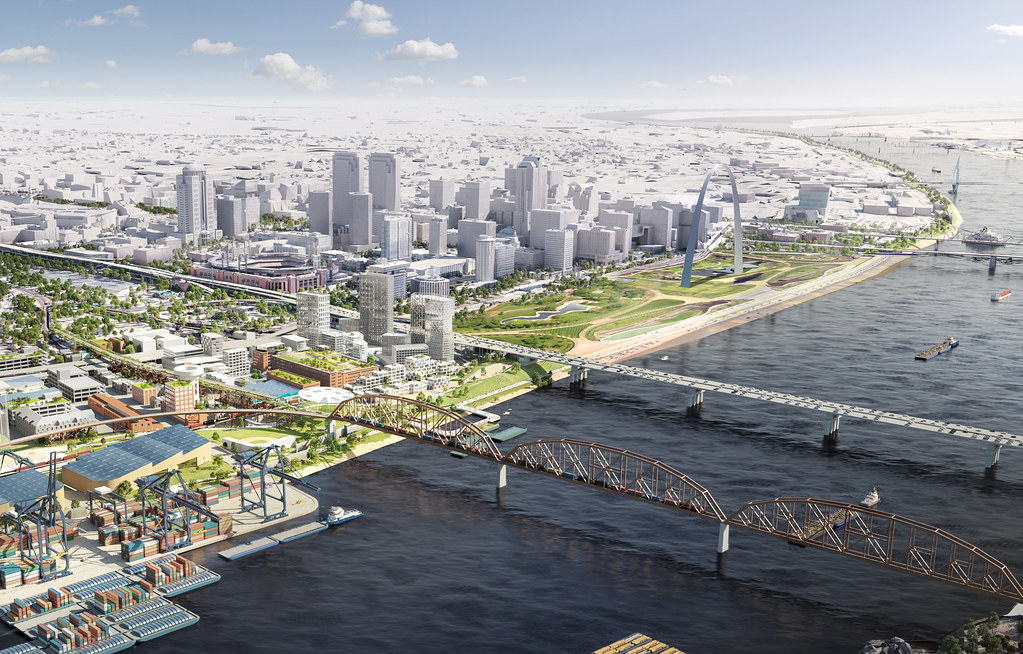 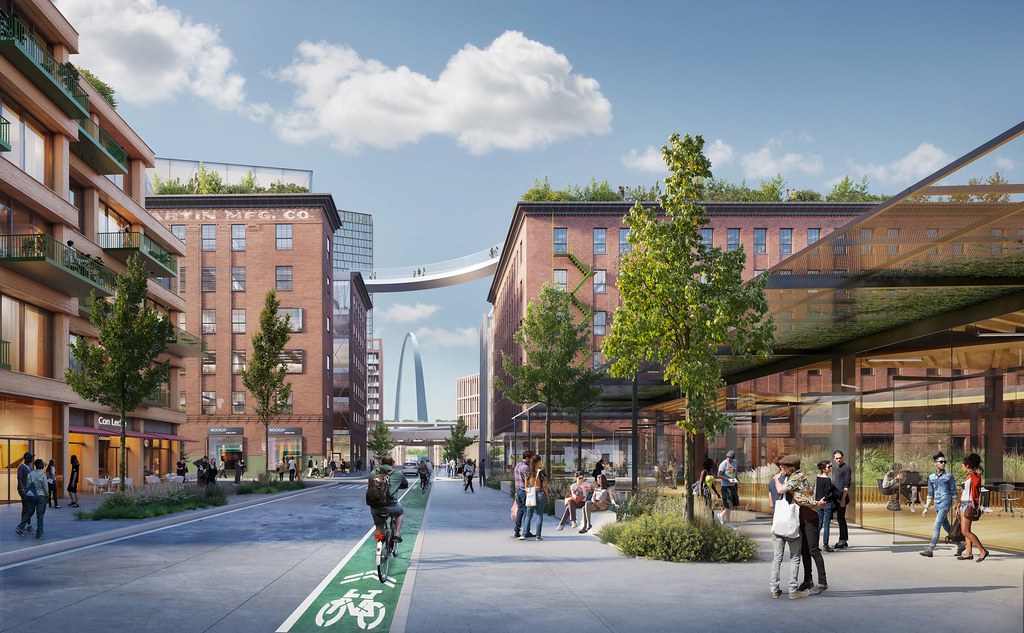 I've been imagining something like this for years on our riverfront that connect with the river market. LastGentleman & another person were pushing for this concept a couple years ago too in another forum. It's gonna be on the back burner until we can get north loop done, but beyond that we need to say fuck the railroads and go over them and just do our own version of this. If we ever want to truly be elite we have to after north loop aim for this next.
Top

Since when did the AT&T Tower get a twin?

Since when did the AT&T Tower get a twin?

Haha. There's a few extras in there including an extra Bank of America tower (the foundations are actually there for it, just it was never built) and there's another Laclede Gas Tower. Seems to be filler, but it is funny. Guess they don't want people paying attention to the background much.

It is a nice project though. I do expect it to be shrunk but if it can maintain the mixture of usages, great. The elevated train bridges crisscrossing the site will make for something really unique.
Top

Mega project for STL. I like the intermodial/industrial aspect especially. PortKC needs to get on that Blue River Port build out proposal. I think there is a lot of money to be made shipping containers via river.
Top

Here's another rendering of this project. This is looking east from 4th Street just north of Chouteau. This view is interesting because it shows potential smaller building colors. I should also mention that the 2nd Street rendering also does that. So it's not all gray like the aerial rendering shows. 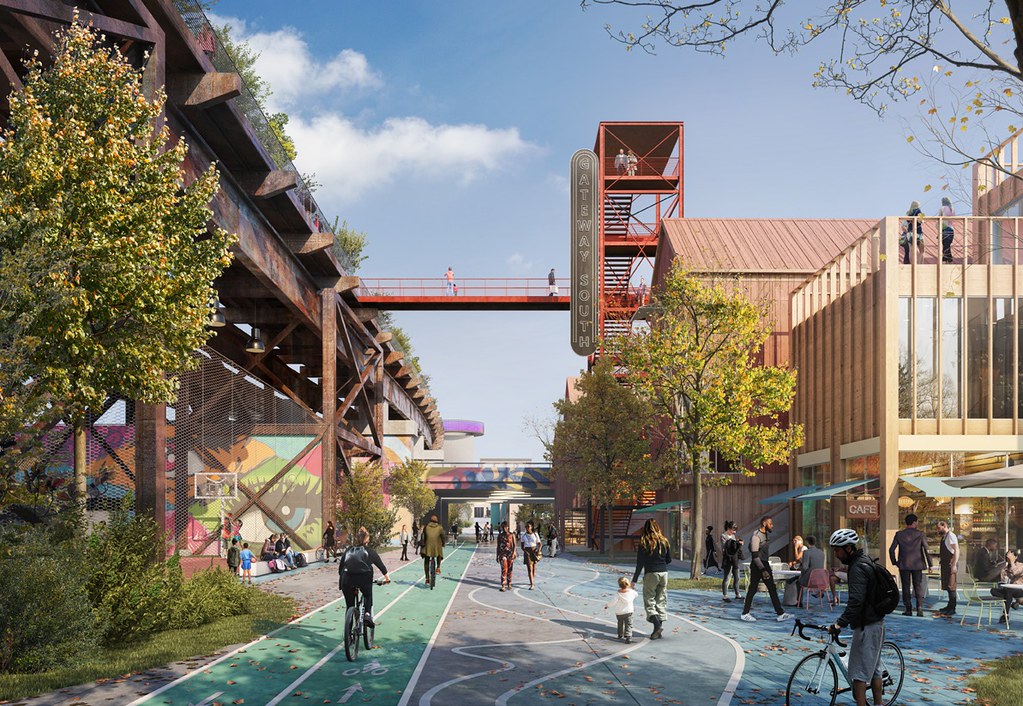 This is a neat project. I'm happy to see the reuse of the warehouse buildings.
Top

Looking and comparing this to SomeraRoad's West Bottoms plans, there's some overlap. Both are ambitious, mixed-use projects meant to be hubs. The only main differences is that Gateway South will have a port along the river and could see high-rises. Pretty neat to see what two New York companies do in Missouri's cities. I'm impressed by both and think both will be special if built
Top

Looks cool, but it seems like the main area of downtown could use some of this love
Top

TheLastGentleman wrote: ↑Tue Aug 16, 2022 4:26 pm Looks cool, but it seems like the main area of downtown could use some of this love

Downtown St. Louis has a fair share of things in the pipeline.
- $200 Million AHM Locust project with the world's tallest mass-timber tower, four building redevelopments, and two smaller infill projects.
- $120 Million redevelopment of the Butler Brothers Building into 384 apartments.
- 1801 WashAve is a 184-unit infill building.
- 1800 WashAve is a 54-unit redevelopment of a historic building.
- 1014 Spruce: New construction, 147-unit building in the Cupples District near Busch Stadium.
- 300 South Broadway: Newly completed redevelopment of older building across from Busch Stadium into 79-units.
- 9-story apartment building planned at 2300 Chestnut Street by Midas.
- Railway Exchange Building is under contract by a New York investment group.
- AT&T Tower/909 Chestnut was bought by SomeraRoad. A $200 Million redevelopment with apartments is planned there but nothing has moved ahead yet.
- The Chemical Building is set to be redeveloped into a Residence Inn and Springhill Suites.
- Laclede's Landing is seeing some of its office buildings be turned into residential space.
- Garrison Companies is a planning a 7-story apartment building just north of Ballpark Village.
- The Jefferson Arms redevelopment into 225 hotel rooms, 235 apartments, and 29,000sf of retail space is finally moving ahead.

Then there's me who's been working on a mixed-use development linking downtown to Gateway South (formerly Chouteau's Landing). So there's a lot going on in Downtown. I think Gateway South is part of the next wave of development and will be in a category by itself. But we'll see.
Top

St Louis is on a roll! Are any of the elevated tracks unused? A high line type ped path would give some great views.
Top

All elevated train tracks are used back in this area. There's even an at-grade railroad there. All will continue to be used during and after construction since the railroads, like the river, help play into the "construction innovation district" theme.
Top
Post Reply
12 posts • Page 1 of 1