Mrs. Sam (Mildred) Ray was a columnist who did a series of regular feature articles for the Kansas City Times and Kansas City Star over several decades, beginning in the 1960s, that printed old postcards of Kansas City along with commentary about their subject. She was also the author of a couple of books featuring "Postcards of Kansas City."  I believe she started the articles in her 70s and she continued into her 90s.

Her  postcard collection is now part of the Special Collections in the Kansas City Public Library.
There is no fifth destination.
Top

This build stood across the street from the other Dean Bros. commercial building, and the Curtiss Studio, on the east side of McGee between 11th and 12th Streets.  It would have sat where the AT&T (formerly SW Bell) brick building is now. The appearance of the depot changed after an addition was made. 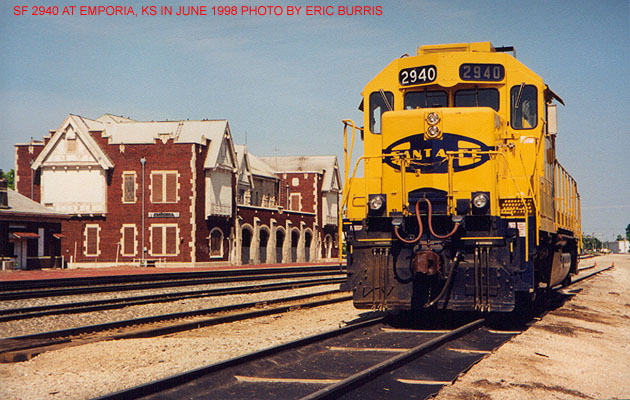 The influence of Prairie-style is in full display on this Curtiss design with covered porches, wide eaves, horizontal lines, and a flat roof-line.  The building also has a Southwestern flavor.

The building is a long horizontal building typical of rail stations being built at the time and shows some elements of Dutch Colonial and Spanish Colonial/Mission elements.

This is a design Curtiss did for the Ararat Shrine Temple, planned for the location of Admiral Boulevard and Vine Street in Kansas City. It was never constructed.   The Shriners would later build a temple of a different design at 11th and Central. We know it today at th Lyric Opera Theatre.

The Boley Clothing Company building is where Louis Curtiss distinguished himself as a distinctive and innovative architect.   He was the first to design, and use, the glass curtain wall in construction of a commercial building.  The practice would have wide-ranging effect on architecture for the next century.  Curtiss gets little credit for this innovation which so changed the physical and structure appearance of buildings worldwide.

One has to imagine how in 1909 how different this building would have appeared against the backdrop of mostly stone and brick commercial buildings.  Never before had terra cotta and glass been used to such an effect in Kansas City.  The building is in many ways a jewel box, and packaged like a wedding cake sitting among the pound cakes of the era.

The Boley Building is one of the most distinctive buildings ever constructed in Kansas City, and it has been landmarked, and placed on the National Register of Historic Places.

Here's what Mrs. Sam Ray had to say about the Boley Building in the Kansas City Times in 1969:


The 6-story Boley building, on the northwest corner of twelfth and Walnut street, was built in 1908 for the clothing store of Charles N. Boley. Today the building is occupied by a Katz drug store, Katz general offices and a Three Sister specialty shop.

Street traffic, as depicted by this 1910 postcard, was not heavy. Only five horse-drawn vehicles are seen. There are street car tracks on both Walnut and Twelfth.

Business establishments north of Boley's were the Fashion shop (hats), A. B. Lewis, proprietor, and the Globe Theater with four tall arches forming the entrance at 1112 Walnut.

At the top left, in the background, is the Hotel Baltimore.

The Boley building was designed by a famous Kansas City architect, Louis Curtiss. Fifty-five years after its construction the August 1963, issue of Progressive Architecture stated.

The Boley building in Kansas City was the masterpiece of Louis Curtiss. Pointing the way for the future and departing from established custom, it is enclosed in flat planes of glass and steel and is conspicuously lacking in the ornamentation and overhanging cornices so popular in 1908. It was considered stark and barren, even ugly, but in reality it anticipated by more than 40 years, the entire range of metal and glass curtain wall construction that became architectural idiom in the 1950's.

Other well known creations of Louis Curtiss were the Bisonte hotel of Fred Harvey at Hutchinson, Kansas; additions to El Tovar hotel at the Grand Canyon and several large railway stations. In Kansas City he designed the Willis Wood theater, the first section of the Hotel Baltimore on Eleventh street, and Oak Hall, the residence of William Rockhill Nelson.

The huge sign of Boley's above the building, was removed long ago, but carved in stone in the masonry above the top floor, on both Walnut and Twelfth, are a large shell, festoons and the lettering, Boley.


The Boley Clothing Company store of Charles N. Boley is pictured in the foreground, with sunlight reflecting on the outside window walls that were constructed entirely of glass and steel, an innovation of the day. The 6-story Boley Building (now known as the Katz Building) was commonly referred to as the glass building, in a day when heavily ornate structures of masonry were the rule.

In the spring of 1971 the building, designed by the internationally known Kansas City architect, Louis Curtiss, was placed on the National Register of Historical Places, Department of the Interior, Washington. This qualifies the building for federal grants and funding for rehabilitation under urban renewal, and those interested hope for an unchanged preservation of the structure, since urban renewal is no longer synonymous with destruction.

The American Institute of Architects, the Kansas City Landmarks Commission and other organizations encouraged the registration.

The building, constructed in 1908, is considered of great architectural significance since it is considered by many historians to be one of the first curtain wall (thin, nonstructural exterior) buildings in the world.

The Boley Building in 1940, showing the Katz Drugstore as a tenant, sitting among its' companion buildings along Walnut.

I encourage forumers to post their more current photos of the Boley Building.
Last edited by FangKC on Sun Nov 11, 2007 4:59 pm, edited 1 time in total.
There is no fifth destination.
Top

Its like an early version of the Luxor in Vegas.  What Egyptian revival structures are in KC?  The only ones I can think of are the Siegrest Engraving on Oak(built as a funeral parlor) and a masoleum at the cemetary at 435 and Holmes.
Top

Those are the only ones I can think of Moderne.  Had they built it, it would have looked great lit with floodlights along the Paseo with landscaped gardens around it.   Had it been built, and survived to present day, it would have been a great alumni center for Kansas City University, or secret society, Skull and Bones, type of club for students there.   :twisted:

I'm quite taken with the lanterns on the obelisks.
There is no fifth destination.
Top

Erected the same year as the Boley Building, this structure was Curtiss' second design to utilize the glass-curtain wall with a terra cotta facade. The building is noted for its' carefully proportioned glass-curtainwall and simple reinforced concrete structure.  The building is 20,000 sq. feet, and bears a cartouche with LC emblazoned on it signifyiing it was Louis Curtiss' studio.   The building now houses The Studio Bar and Grille and the former studio space upstairs is rented out for events.  The Curtiss living quarters appear to remain unrenovated.

This landmarked building is on the National Register of Historic Places.

These photos are courtesy of Hypno-Raygun.

More images can be found at:

This photo shows the Louis Curtiss cartouche indicated by "LC".

FangKC, I had a private message from you, but since I am new I can't reply. I don't mind my photos here as long as you give credit for the photos. Thats all! Thanks!
Top 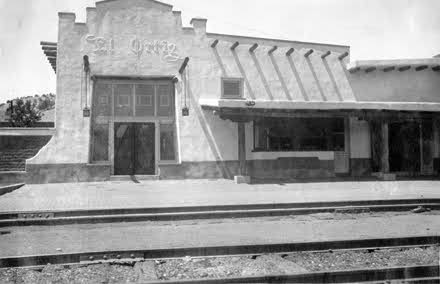 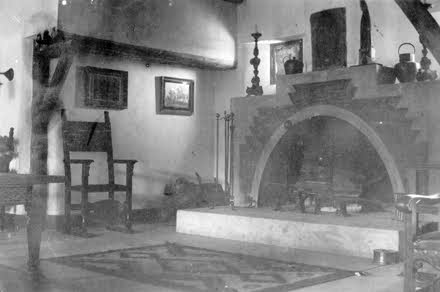 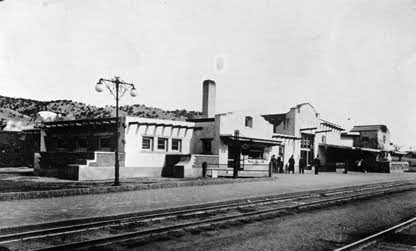 A postcard painting of La Placita at El Ortiz Hotel

The 1100 blocks of McGee and Grand had the highest concentration of Curtiss-designed buildings of any place in Kansas City:  The Halpin-Moore building on the NW corner of 12th and McGee; the Argyle Building on the NE corner of 12th and McGee; the Dean Bros. Realty buildings at 1105 McGee, and 1111-14 McGee, and the Curtiss Studio Building at 1118-20 McGee.  On the same block was the building he had designed for Thomas Swope and the Robert Keith Furniture Co. at 1101 Grand, which is now the site for the Professional Building. Also, block away was the Boley Building at 12th and Walnut, and the YWCA building at 10th and McGee.

Only the Westheight neighborhood in Kansas City, KS. had so many Curtiss buildings assembled together so closely.

Other areas of the city had Curtiss buildings adjacent to each other.  At 11th and Baltimore stood the Willis Wood Theater and the Baltimore Hotel, which were connected by tunnel.

At 11th and Washington, the Virginia Hotel and Progress Club were across the street from each other.

At 12th and Central were the Standard/Century/Folly Theatre and adjoining Century Hotel.

Near 12th and Main were the Jones Stone Department Store and Baltimore Hotel. 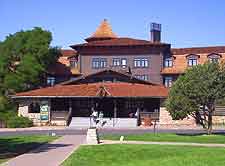 These four depots all had a similar, standardized design with minor modifications for each site.  The depot in Lubbock burned and was demolished in 1959.  As of 1991, the depots in Post and Synder remained.  The Sweetwater depot was demolished.  Curtiss submitted two designs for the Sweetwater depot.  One that was built, and another that was a larger version.

Shown is the Sweetwater, TX, depot.

Looks very similar to the Boley Building in some respects.

For more recent images, go to Built St. Louis at:

http://builtstlouis.net/opos/222n7th.html
There is no fifth destination.
Top

This addition to the Century Hotel, adjacent to the Standard/Century/Folly Theatre, expanded the hotel west to Broadway.  The design deviated away from the earlier Century, using bay windows.  My guess it that Curtiss, deviating away from his experimentation in building design and returning to more traditional forms, was trying to blend the building with the Convention Hotel, and the Brunswick Hotel, that were on the opposite corners of 12th and Broadway.

The Convention Hotel was across the street on the SE corner of 12th and Broadway. It was not a Curtiss design. The Century Hotel and theater can be seen across the street to the left.  Bartle Hall occupies the site today.

The Brunswick Hotel was located west of the Century Hotel addition on the NW corner of 12th and Broadway.  The Quality Hill Supermarket building occupies the site today.  The Brunswick was not a Curtiss design.

This appears to be the building, shown in the photo as the Marquette Hotel in 1945.  The location is correct, and the design above the entrance appears to be a Curtiss element--usual for that style of building. It appears in the photo that the building might have been altered from the original Curtiss design--especially around the windows. But again, we have a very traditional-looking building here with just a small Curtiss design flourish that sets it apart from the surrounding buildings, and draws the eye to the entrance.

The surface parking lot is there today. It would have been just south of the vacant Greyhound Bus Terminal that is awaiting demolition.

There is no fifth destination.
Top
Post Reply
152 posts