Is the term midwest to broad?

Come here to talk about topics that are not related to development, or even Kansas City.
Post Reply
31 posts

i could be completely wrong about illinois migration to specifically rural northern missouri , if they did it seems like they came from marginal (farming) areas of southern illinois or pivoted up through and then back down to missouri. the character of northern missouri (people) seems a bit different than northern and central illinois, from my extensive time working at jobsites of mine from far northwest missouri to the indiana border. when i work in central or rural northern illinois for an extended time and then go to ruralish northern missouri it does feel noticeably more appalachian, or something, and the german last names fade. some of the towns on the prairie (particularly the eastern "triangle" of northern missouri) feel like dislocated river towns with no river.

i'll allow that i could have a huge gap in knowledge of the towns northwest of columbia and the highway 63 corridor that were settled probably more after 1860. im far more familiar with northern missouri north and northeast of como. i tend to forget that much of missouri was far from settled as of 1860 or whatever.
Top

in any case, missouri is a mess to characterize. i've been spending a lot of time in illinois and kentucky and was just in cincinnati and indianapolis and missouri feels like an encore mash-up of all of that, really, and of course kansas city is a lot like indianapolis and st. louis is kind of a more industrial, rough hewn echo of cincinnati.
Top

Linguistics says close to the same thing I did earlier
http://aschmann.net/AmEng/#SmallMapCanada

Sure, you can find exceptions but to E-W latitude migrations have been strongly born out historically. Especially with slave vs free states. And the slave holding areas of MO were concentrated along the river.

History mishmashed things for sure but the base was a middle latitude population originally, add German immigrants from a similar climate to the north and more of a southern background to the south.

The rural farming areas feel much the same across the state.
Top

flyingember wrote:
And the northern farming country would have been heavily be populated by farmers from Illinois farther north.

Changes happened over the years of course, but these three general bands largely hold up today. You see a lot more people move to KC from Nebraska than Arkansas because of cultural fit.

i agree about KC...northern missouri i'm not so sure. seems more like migration via kentucky up the missouri and overland. there's quite a few northern missouri cities named after cities in kentucky and virginia. i've never seen anything to indicate that any appreciable amount of people migrated to northern missouri from illinois (northern/central). while western illinois (between the illinois and mississippi) is somewhat like northern missouri, it changes as you head west from indianapolis towards hannibal and over to st. joseph. hannibal and louisiana, mo certainly have some southern inflected stuff going on...well ohio river/kentucky inflected stuff. sometimes when i drive between hannibal and st. joseph i sometimes forget which direction im driving...they have some similar feels going on even though st. joe is much larger.

also the germans came into st. louis very early if we are talking about the real boom years after the creole era. a much earlier period than the plains germans like in kansas or even like minneapolis.

Parts of central Missouri were indeed settled by southerners that brought their slave economy with them - https://en.wikipedia.org/wiki/Little_Dixie_(Missouri). We typically think of the Ozarks as being the "southern" part of the state but the area around Columbia probably was, at least historically, the most southern in attitude. Even Weston was a tobacco growing area. Odd that even within the heart of little Dixie, the Missouri Tigers was a civil war era organization that was formed to fight south-leaning bushwackers. The Ozarks in the 1860's did not have a sizeable population as there was little way of making a living there. To me, "Little Dixie" doesn't really have much of a southern feel any more but the Ozarks and Boothill certainly do.

The northern part of Missouri was settled more by people from Illinois, Indiana and Ohio. The names are very anglo in nature. To find German names in Missouri, the area south and a little east of Jefferson City is replete with them: Vienna, Westphalia, Herman, Koeltztown, Freeburg. And a bit of French too - Gasconade and Vichy.

Missouri's two main cities are very midwestern and tend to go against the grain of the rest of the state. St Louis is as you describe. It was among the 5 largest cities in the US until 1920 and in the top 10 until the 60's. KC is very different as it accumulated its population at a much later date and from a different source of in-migration. I don't know many people in KC from Missouri east of KC and south of I-70. I know a ton of Kansans that have moved to the KC area but that's to be expected with KU essentially within the KC metro and the med center on the state line.
Top

"i agree about KC...northern missouri i'm not so sure. seems more like migration via kentucky up the missouri and overland."

Don't forget the Sante Fe neighborhood at 85th and Wornall has a connection to the Daniel Boone family. Believe the area was home to one of his sons, Daniel Morgan, for a period of time in the 1820's before moving on to Kansas. Another son, Nathan, was involved in establishing the trading post that became known as Fort Osage.
Boone County Mo is named after Daniel Boone.
Top

We Mapped 'the Midwest' for You, So Stop Arguing
...

CityLab set up a simple two-question survey, asking people to input their zip code and say whether they considered that location to be in the Midwest. We let people define “Midwest” however they wanted. So far, more than 12,000 of you have responded. (The survey is still running at whatsthemidwest.com, and we’re hoping to get more responses, especially from people living in smaller towns and cities.
... 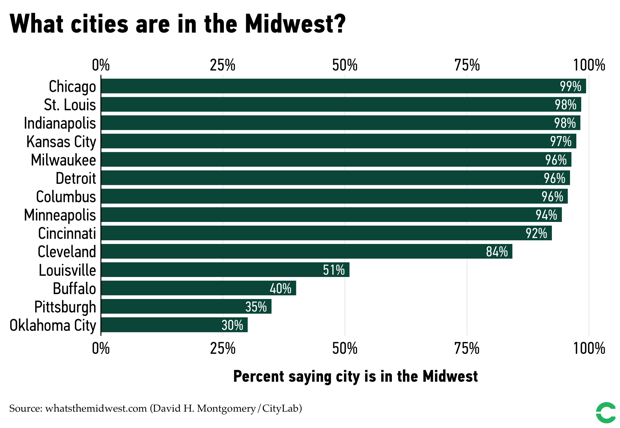 And there's this too

Generally agree with map however I spend a lot of time in FL and it's three worlds. Northern FL is part of Deep South, S Florida is Latin America but Central Florida is loaded with retirees, especially from Jersey NY and Michigan it seems with a lot of United States of Generica newer suburbs, but you'll see many confederate flags, Jesus Extremists and Latinos in Central FL too. 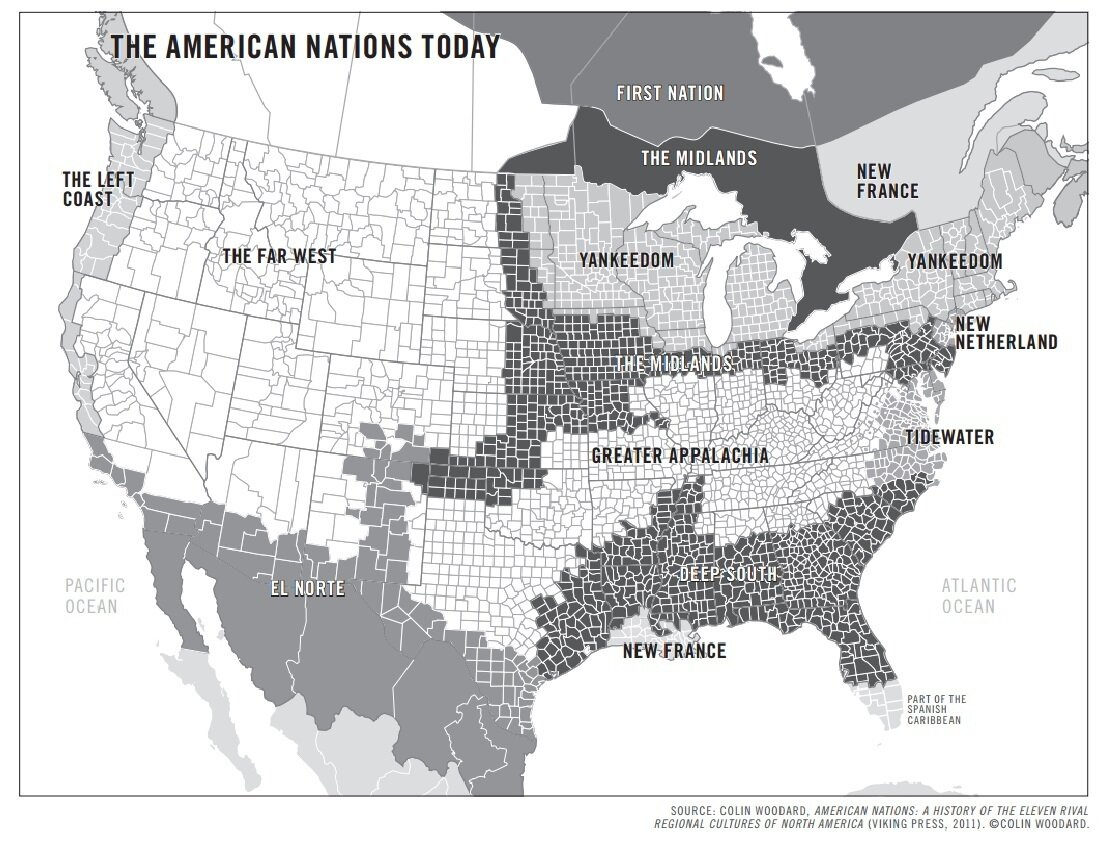 I read that book and it's very good. Highly recommended!
Top

earthling wrote: ↑
Fri Mar 06, 2020 10:12 am
Generally agree with map however I spend a lot of time in FL and it's three worlds. Northern FL is part of Deep South, S Florida is Latin America but Central Florida is loaded with retirees, especially from Jersey NY and Michigan it seems with a lot of United States of Generica newer suburbs, but you'll see many confederate flags, Jesus Extremists and Latinos in Central FL too.

We covered that map 2.5 years ago in this very thread. It shows one aspect that's not wrong but I don't think they split the country up enough.

Northern Georgia and southern Ohio really aren't the same culture. Parts of West Texas have a lot more in common with other cow farming areas of the west than not