MichaelÂ® wrote: Classic alright.... shit-for-brains chef doesn't know how to stay on-topic.
I doubt the moron even reads thread titles.
Next he will have his wife sign up and defend him in threads.

you are just jealous i still have a wife and yours left while you were in rehab for that tragic drug addiction.

you really should start the outpatient electro shock again mikey. would really help.

[br] This is horrible.
MU FINISHED THE YEAR RANKED HIGHER IN HOOPS AND FOOTBALL THAN THE KAY U JAYDORKS. UP YOURS KAY U JAYDORK FANS!!!!

this is the 3rd time you have posted these photos, we get the point. youre pissed off the vote didnt turn out the way you wanted and now we are "stuck" with kauffman being on the outskirts of downtown. right?
http://forum.kcrag.com/index.php/topic,9042.0.html
Top

He has a "short-term memory" problem.  He keeps forgetting that he has started the thread.

He might also have an OCP problem.
I may be right.  I may be wrong.  But there is a lot of gray area in-between.
Top

For all we know he is a NIMBY

If these other citys are sooo right, and KC is so screwed, then why post about it...get a life and move the **** out of our city.
What's graciously given to KC, is strong for the region as a whole.  Passion and benevolence will one day exeem towards all whom know true adoration.  We shall triumph to better the community as One within
THINK (ONE) KC.
Top

I am and will always be a downtown baseball proponent but good God, channel all the energy bitching about KC residents f*cking up into forming a plan to get it right in 15 or so years.
Top

MichaelÂ® wrote: Whoever the moderator in here is isn't doing his job.
I suggest you clear out all posts athat aren't on the subject of the pics and renderings.
chef/timberwolf/downtownbryan/im2kull you already did move out of the city. I wish your ignorant ass would stay out.

Sorry bud, but im still in the city.
What's graciously given to KC, is strong for the region as a whole.  Passion and benevolence will one day exeem towards all whom know true adoration.  We shall triumph to better the community as One within
THINK (ONE) KC.
Top

While I don't agree with the conduct in this thread, I do agree with the idea that we screwed up.  However I don't believe it is too late to do anything, their contract lasts another 25 years or so right? That doesn't mean that Kauffman will last that long with renovations... What we need to do is start planning now for the next stadium and require that the Royals move Downtown when Kauffman is done.

I recently went to Oklahoma City to tour many of it's sites, and I went to a Big 12 KU/OU game in their AAA Downtown Stadium that is in a district that is somewhat of a mix of the Power and Light District and the Crossroads.

It is sad that OKC has built a stadium Downtown for their AAA and have received the Big 12 plus other events.

This image is a little out of date, as many new buildings have popped up around it: 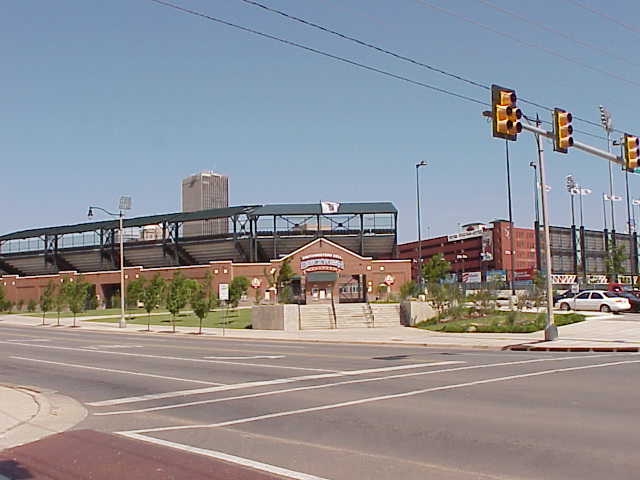 But as our canal tour guide said, new private developers have stepped up after the city built Bricktown and are now building around it... Sonic's world hq is next to the stadium, hotels and condos are popping up, retail is popping up.

It was also sad, I had more fun watching colleges I don't care about play each other than it is to watch the Royals humiliate themselves. The Royals could fill the stadium of 13,000, but just barely

OKC is smaller with less major developments, yet they were smarter than we were and spent money to build this very beneficial stadium.
Top
Post Reply
51 posts