Want to talk about your favorite places besides Kansas City? Post any development news or questions about other cities here.
Post Reply
26 posts

Nashville?
I see a lot of trash talk from Nashvillians

I haven't been in a few years and realize their economy is pretty hot and they are in the midst of a construction boom in their core.
I researched a few of the projects and some of them are really nice, most of them are fugly stucco suburb trash.

To me Nashville is Birmingham with lots of mardi gras beads playing a guitar knowing only 3 chords.
aknowledgeableperson is currently on your ignore list.
You will no longer see any of her posts.
Top

I went to Nashville a year or so ago. Development wise, they are certainly kicking KC's ass. As far as is it a better city? The thing Nashville (and many cities) has over KC is it is easy to figure out where to go and there is a central district where things are "happening". If the Plaza was contiguous or adjacent to DT, KC would have this, instead we are spread thin so sometimes if people don't know where to go or only go to one area, they think KC is much smaller with less going on than actually is.

That said- honky tonks get a little over done after awhile. There were some good breweries and a really good music scene outside of the honky tonk thing (just like most cities). My judgment? Nashville probably edges KC in many areas, but KC is beginning to close the gap.
Top

Nashville is certainly passing up KC in terms of growing faster (faster than KC's hottest years) and a better downtown that never died to the degree KCs did - less to bounce back from. Can't really argue with that. Nashville has a huge music production scene that goes beyond country that is a major attraction (like Austin), major research university (like Austin), better winters (like Austin), mountains nearby, but KC has broader range of big city amenities (especially sports and maybe more mature cultural attractions) than both Austin and Nashville. KC is a mature small major metro, Austin is a big college town and Nashville is somewhere between.

KC can't really be compared to the south as it's nearly all fast growing. And KC's winter aspect isn't an attraction or embraced (like Denver, MSP).
Top

KC can't really be compared to the south as it's nearly all fast growing. And KC's winter aspect isn't an attraction or embraced (like Denver, MSP).

While I see what you're saying re: fundamental structural differences between these metros, I disagree.

KC can and should be compared to cities like Nashville, Denver, Austin, MSP. These are peer cities in size, general status (i.e. Tier 2) and rough geographic location (not on the coasts).

While we should certainly understand that some fundamental differences may not play in our favor (mountains, state capitals), we should also look to these places to understand how a city like Nashville can be wiping the floor with KC in terms of current development and strategic vision (convention center, airport, growth of music biz, etc.).

And not making excuses - for example, no major university? How do we begin to fix that? What has UMKC been doing all these years? Where is a regional vision to build something there? How do we better connect with KU or other major regional universities? And so on...
Top

^I agree with you that comparisons can be made in that context. Though southern cities are improving as the side effect that they are you growing naturally anyway, primarily because nicer in winter with economy that doesn't lag as much during winter. KC has to continuously improve itself further to draw people, people don't come naturally as much. Maybe an oversimplification but some truth to it.
Top

It's the new Austin. Get used to it. KC will never be like that no matter what. Emrace it, because Nashville and Austin are both awful.
Top

I visited Nashville last summer and there is definitely a ton of building going on. There were tower cranes everywhere (15-20) in the downtown core.

It was a fun place to party, if that's your thing, and better than KC in that aspect, but that's it. The live music scene is much better than KC too.
Outside of that and the tourist traps, there isn't a lot to do for everyday locals. I put it up there with Vegas as in outside the touristy areas, it seemed pretty dull IMO.

The foodie scene isn't as good overall as KC's. I tried many of their top food joints and wasn't all that impressed outside of the hot chicken.
Top

nashville is sort of next door to us, even though until recently there wasn't much interaction. it's trendy now for successful st. louis restaurants/brewers/etc to set up a nashville location, and i'm seeing a lot of creative flow from chicago to nashville. nashville is definitely on fire right now, extremely trendy, and annoyingly overrated, but it's a boomtown, to be sure. however, nashville would kill for the kinds of business districts we just have laying around in the midwest. they convert houses into storefront commercial in trendy districts, since the urbanity is so incredibly lackluster.

my wife grew up in the area, and we sometimes trade barbs over nashville. but, there's some good stuff there, and it's got the coastal attention.

i can't stop saying nashville over and over.

as a midwesterner, nashville does make me want to scream into a pillow. #nashville
Top 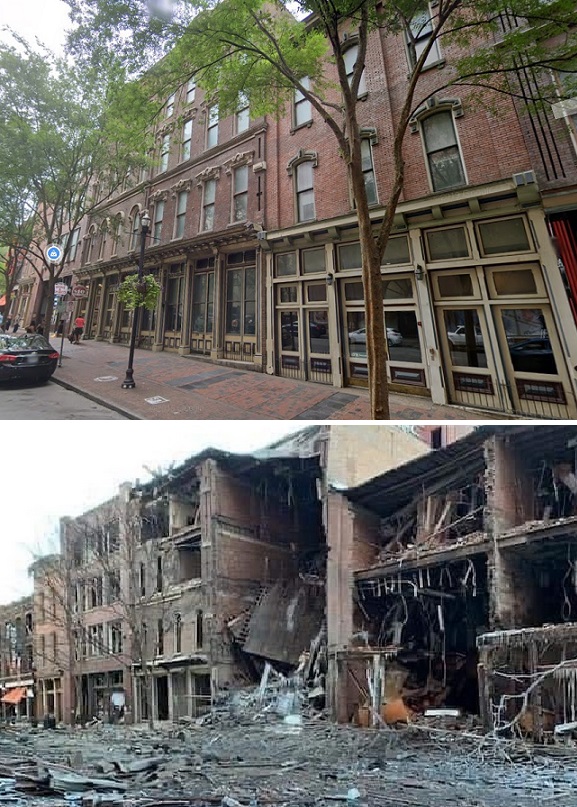 Amazing only the bomber was killed. How much do you think this played into MU backing out of the Music Bowl?
Quocunque Jeceris Stabit
Top

I think it was a huge factor. Oh well these bowl games are meaningless exhibition games anyway
Top

If you're going to post pictures of damage from an explosion, you should at least post pictures of the building that was targeted (The ATT Longlines (Yes, that Longlines network of buildings that you see in many major cities.. KC.. NYC.. etc) building in Nashville).

If you're going to post pictures of damage from an explosion, you should at least post pictures of the building that was targeted (The ATT Longlines (Yes, that Longlines network of buildings that you see in many major cities.. KC.. NYC.. etc) building in Nashville).

IE: You don't post starbucks photos when describing the 1995 bombing of the Alfred P. Murrah Federal Building in Oklahoma City.

Go ahead then?
Top

I mean having part of their old town blown to ruins will likely have a longer cultural impact than their nondescript ATT building getting damaged. Also much more relevant topic to this board
Top

Nashville has had a big week in terms of development news. This week brought 6 new towers in three developments consisting of offices, apartments, and a Ritz Carlton hotel. Just quick spotlights on each of those here.

The Ritz Carlton Nashville
M2 Development Partners proposed this 42-story hotel and residence building, along with a shorter 32-story apartment building, on a parcel near "Stix" circle. The project will sit along Korean Veterans Boulevard and replaces a former office proposal called "One KVB". This is being designed by Skidmore Owings and Merril (SOM). With this being a Ritz Carlton, this becomes the third "ultra luxury" hotel in Nashville (joining the Conrad and Four Seasons). Project facts...
- 240 Luxury Rooms & Suites
- 150 For Sale Condos
- 185+ Multi-Family Rental Units
- 6000SF Spa
- 30,000SF of Meeting & Banquet areas
- 10,000SF of Supporting Retail
- 560 space Structured Parking Garage
- Signature Roof-Top Restaurant.
- Q1 2025 completion is eyed 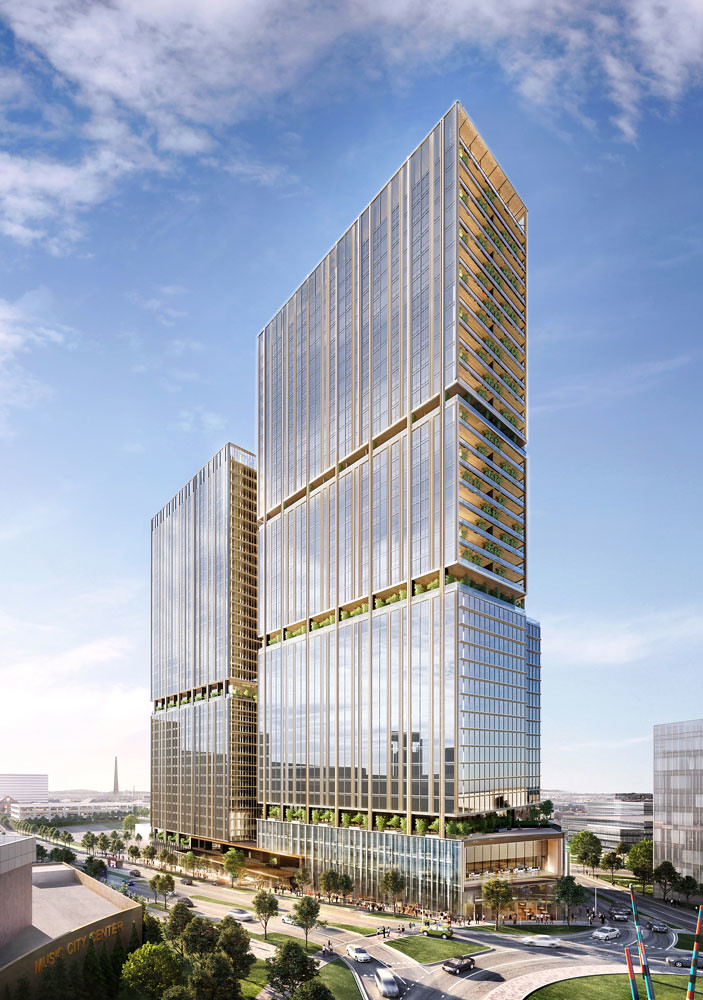 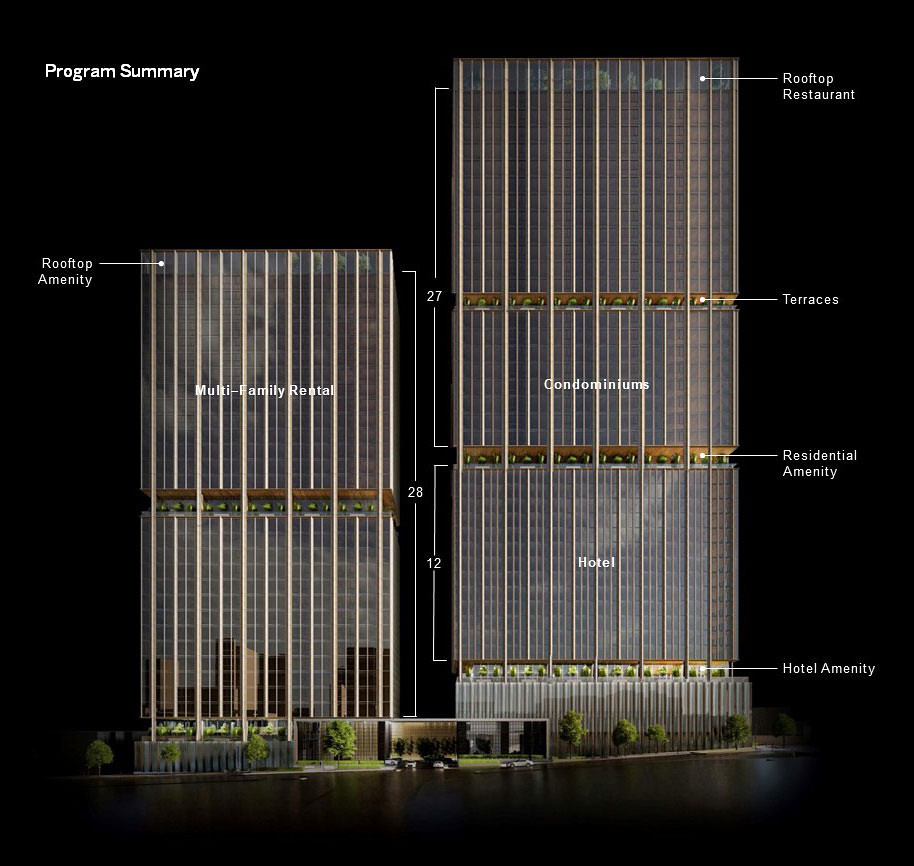 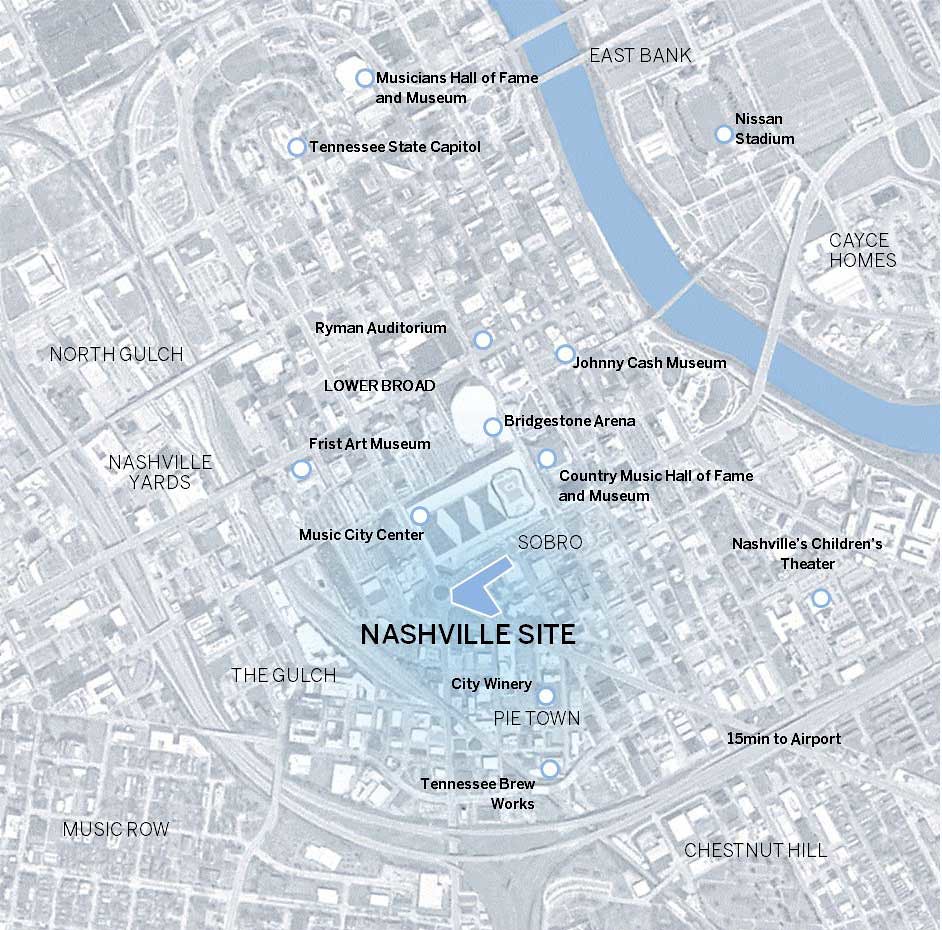 Somera Road's Voorhee's Block
Situated in "pie town" and near the SoBro and Gulch neighborhoods, this project consists of the redevelopment of the historic Vorhee's Building and Downtown Antique Mall buildings into creative office space. Note: the Voorhee's building renovation is nearing completion. The total number of units here has not been specified. However, the towers will sit at 16 and 20-srtories, include ground level retail, a two floor underground parking garage and a 5 floor above ground garage. A pedestrian plaza will connect all four aspects of the block development. Nashville-based ESA is the architect. 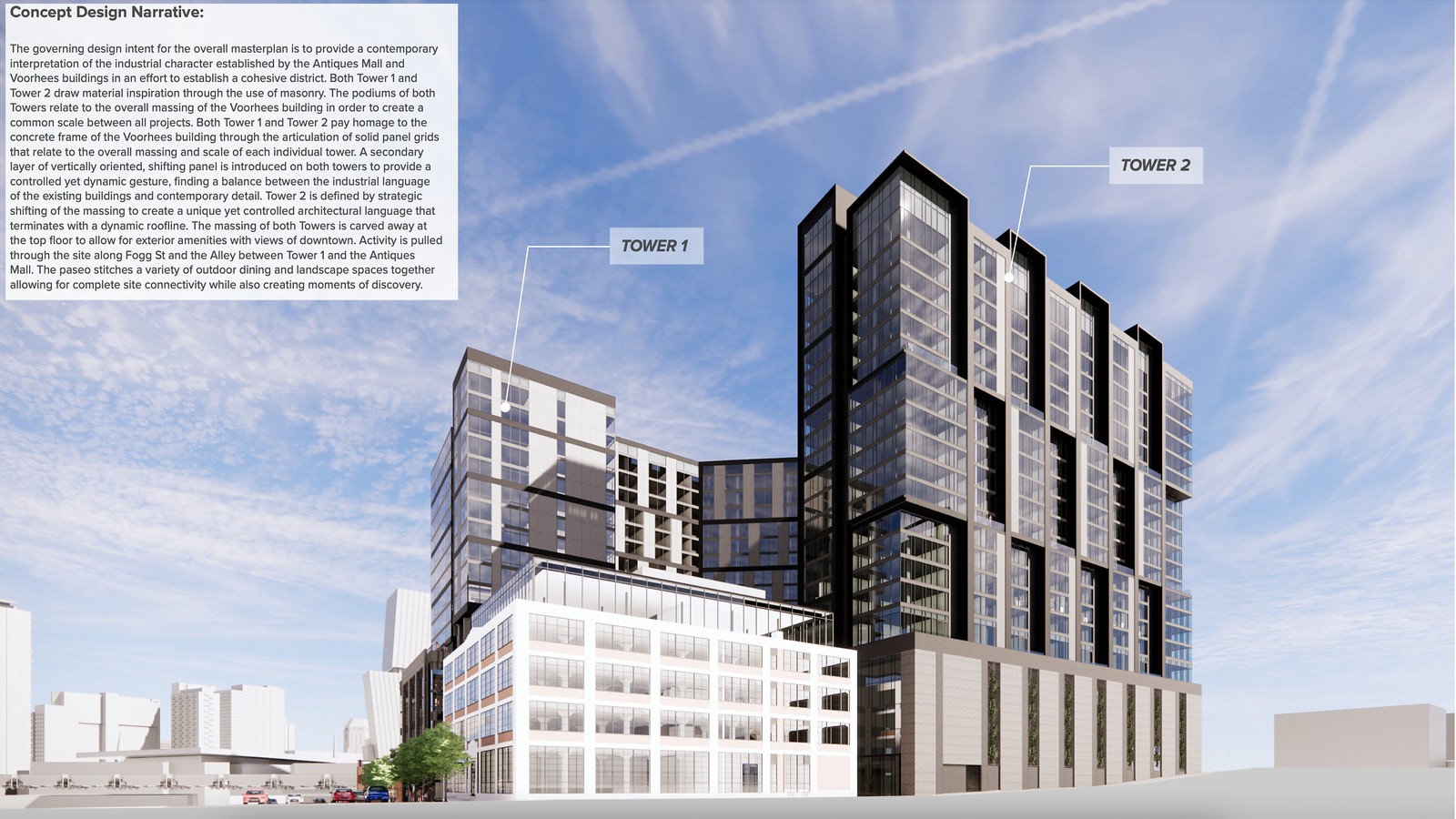 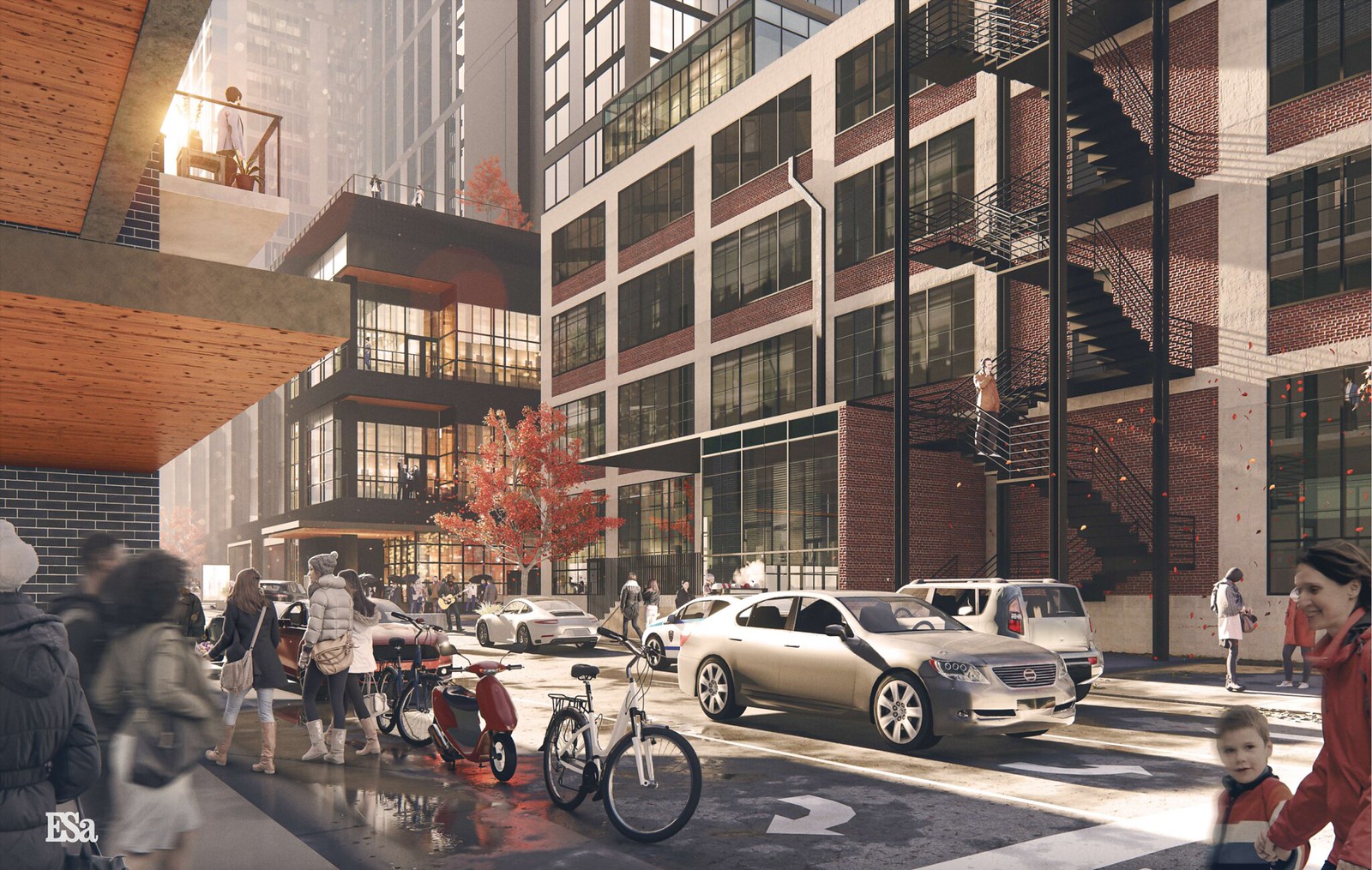 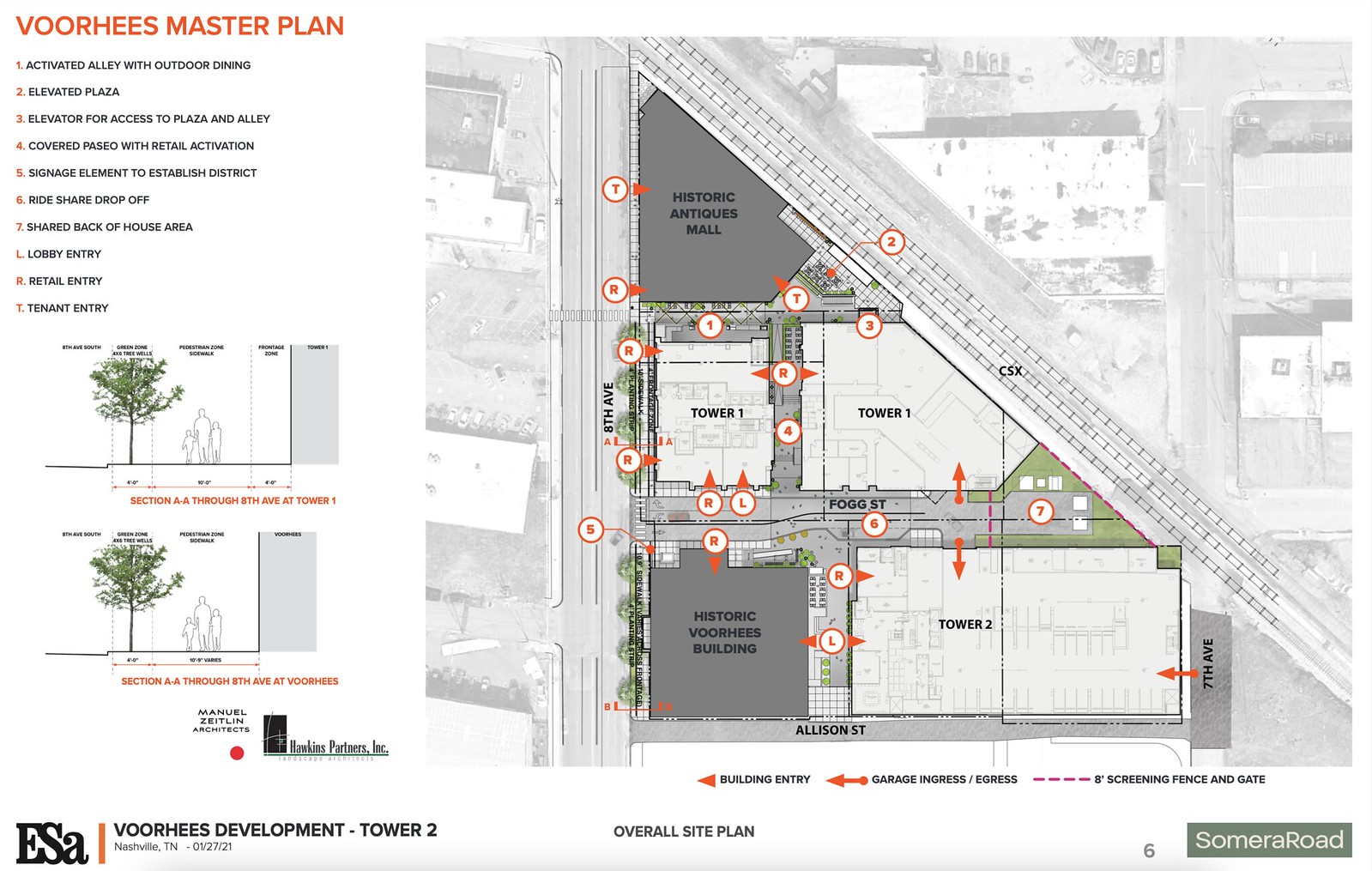 2nd and Peabody
Planned to become the tallest building in the State of Tennessee and City of Nashville, the 2nd and Peabody project will rise in the Rutledge Hill area of the City, which is just Southof SoBro and Downtown. The project will include two hotels, apartments, office space, 6 levels of underground parking, and retail space. The main tower will consist of the hotel and office components and stand 38-stories and 618ft in height. The shorter building will be a hotel and housing and stand 33-stories and 456ft. The Congress Group is the developer (and is the same developer doing the Four Seasons Hotel and Residences up the road). Nashville-based Gresham Smith (who designed the Nashville Yards project) will serve as the architect here. Exact numbers on hotel rooms, apartments/condos, office space and retail space is not yet available. 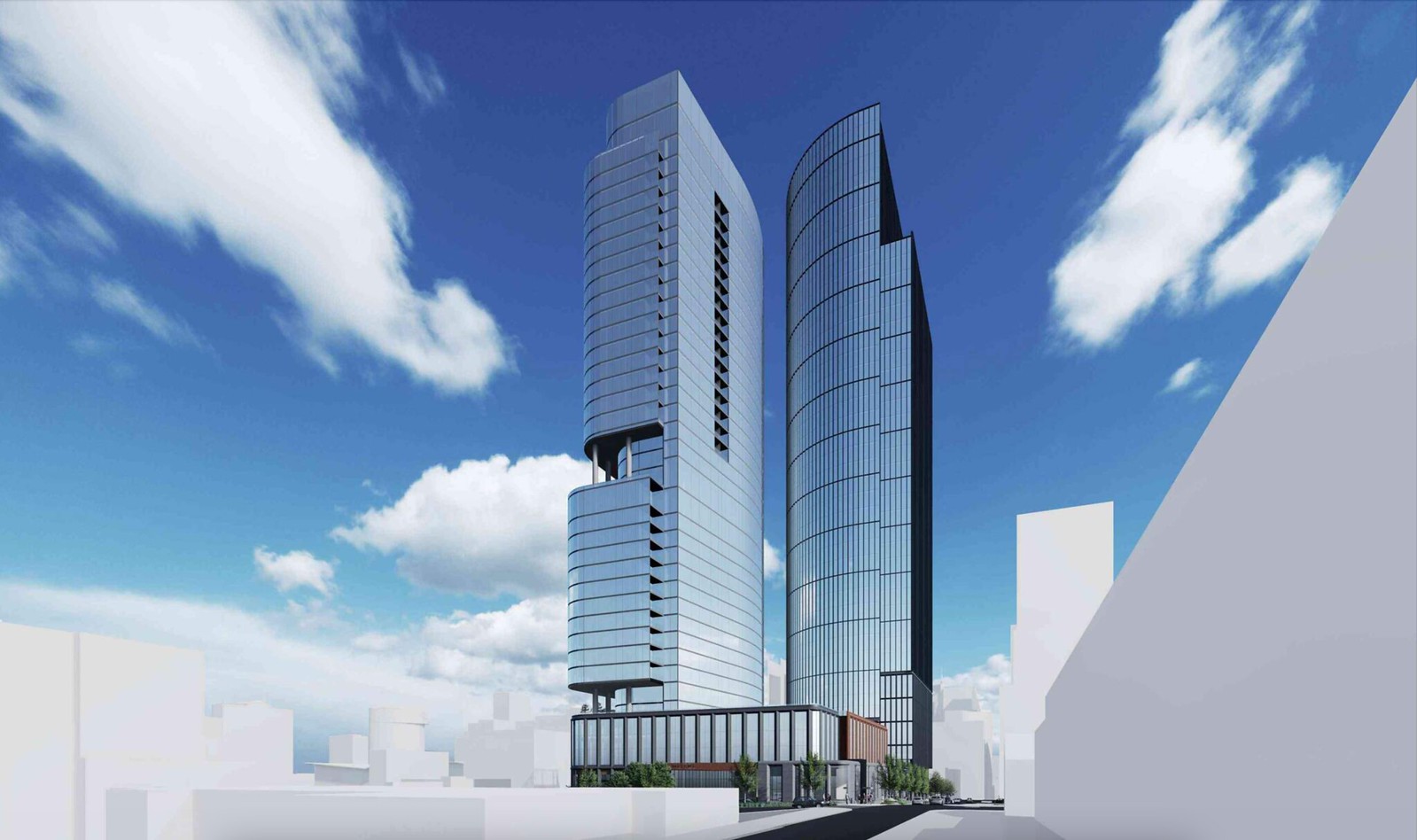 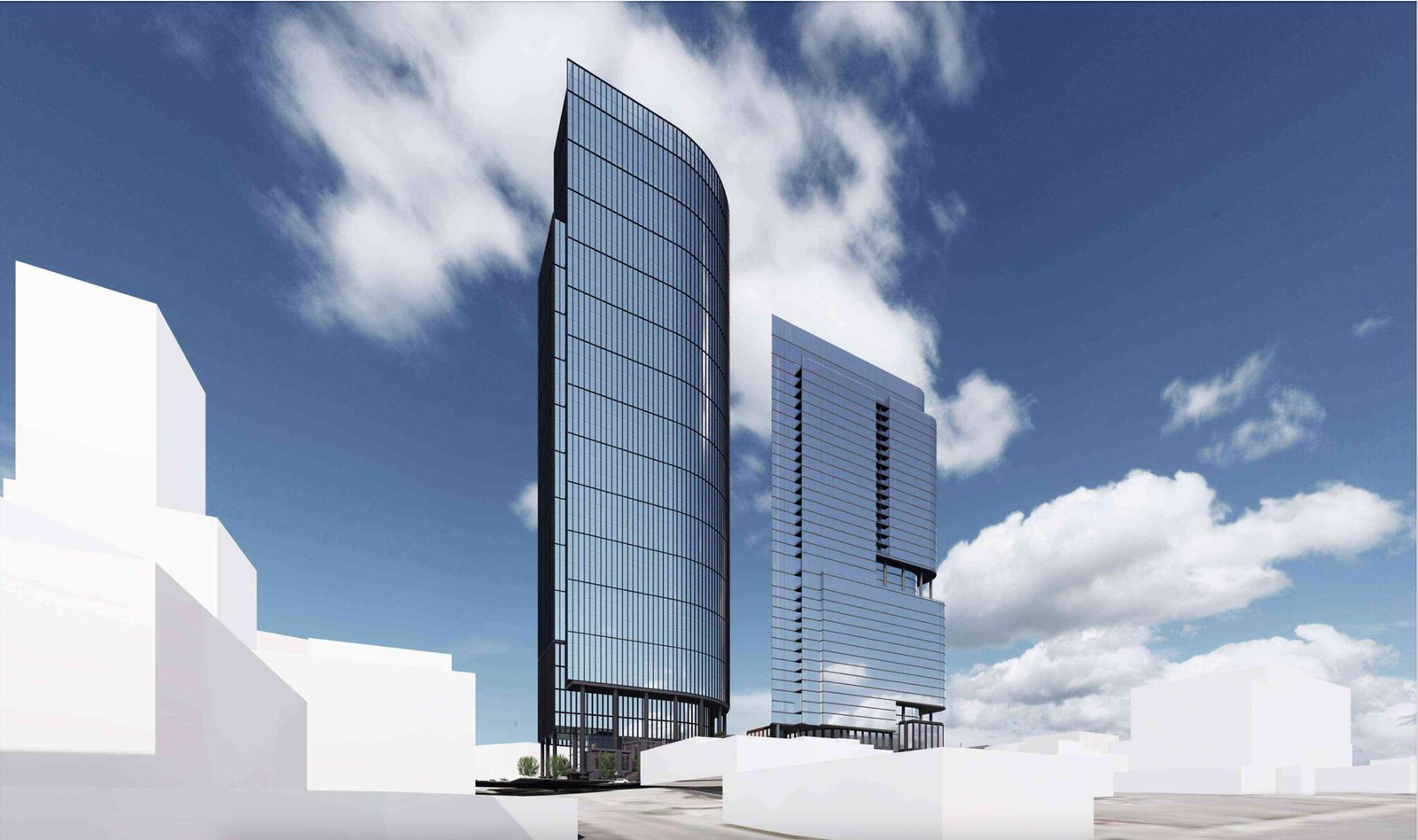 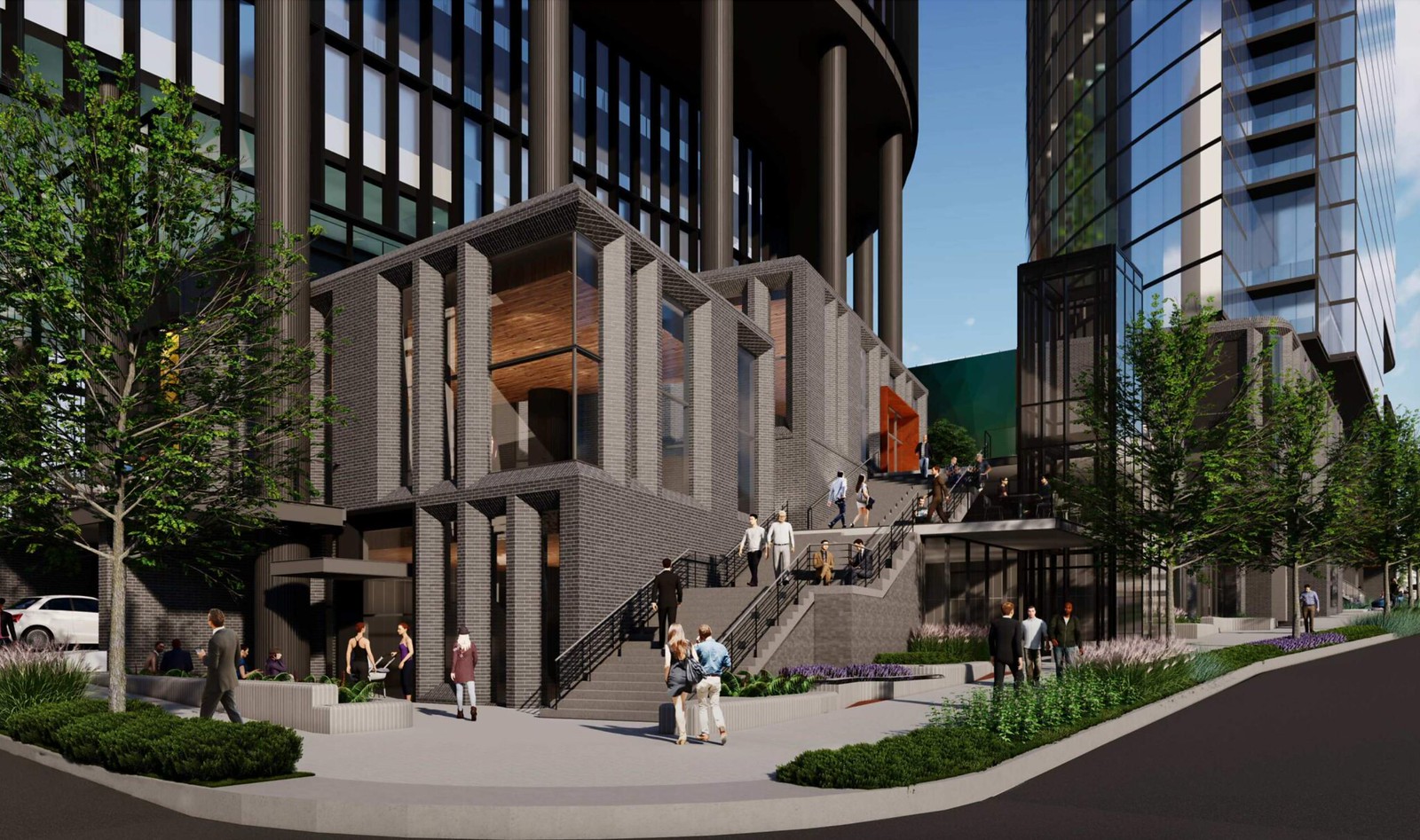 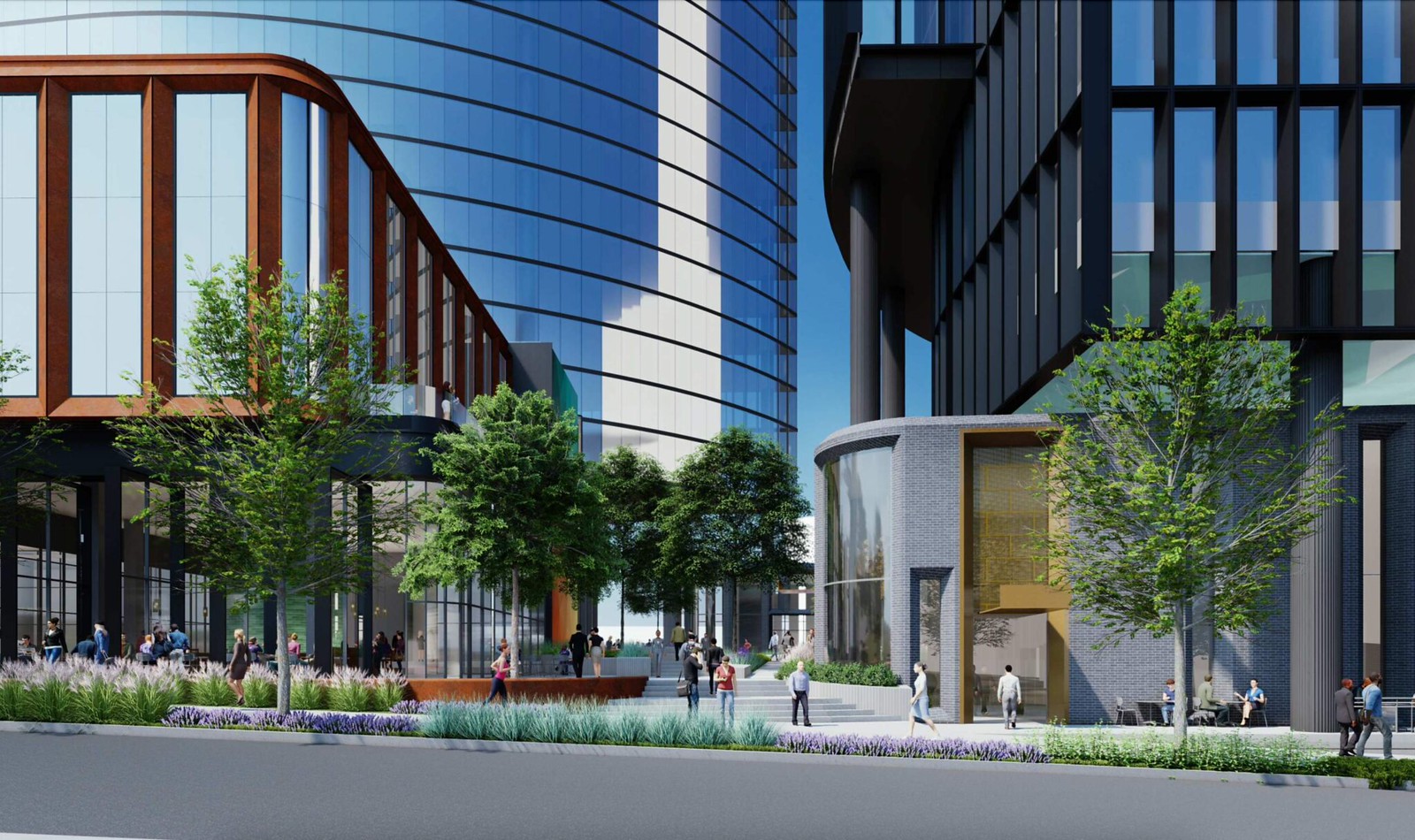 Awesome, our peer cities keep chugging along and we just tied our hands with new a new ordinance causing developers to cancel projects...it’s a wonder we’re falling behind
For all my military brothers and sisters out there, thanks for paving the way, ill do my best! AIRBORNE!
Top

They have a mayor that complains about neon signs on some of the newer developments saying it looks like a circus. Beyond that though, they don't have a City Council that torpedoes development.
Top
Post Reply
26 posts