Re: KC Advertising and Signs

bbqboy wrote: Roanoker, you're not wrong, the Pontiac sign was of the "Chief" and sat much closer to Man Street. We were frequent train riders in my childhood(50-60's) and I can still picture coming out the doors of Union Station and looking at Signboard Hill and Liberty Memorial.

Thank you, BBQ! I remember seeing that gloriously lighted sign from the car as we drove by.

See how the new reflects the old.

Inside Union Station. I remember when this giant room was filled with lots and lots of people, listening for the announcement that their trains were ready for boarding. I can still hear the zillion echos and see the subdued lights, as if they were in a Rembrandt painting. I was four years old, and I could ride a train to St. Louis with my mother for free. I remember the big Pontiac sign on Signboard Hill, all lit up with computerized lights. But there were no computers then, so it must have been something else. But that's a different story. Here's the way it looked a few months ago, only hinting at its former glory. Sigh.

Roanoker wrote: I had no idea of time back then. My mother was always late. We rushed to the station in a taxi, and I remember the gigantic Pontiac sign with rolling/dancing lights on what was then Signboard Hill. There was enough time to eat meals in the dining car and snooze in the sleeper car. We would drive back to Kansas City with my dad in his company-provided car.

Nothing was better than emerging from the doors out front after coming home and seeing The vista from Western Auto to Liberty memorial.
The Pontiac sign was larger than life. It and the Conoco hottest brand going sign at SW Blvd. and 7th st., were my favorites, I think. 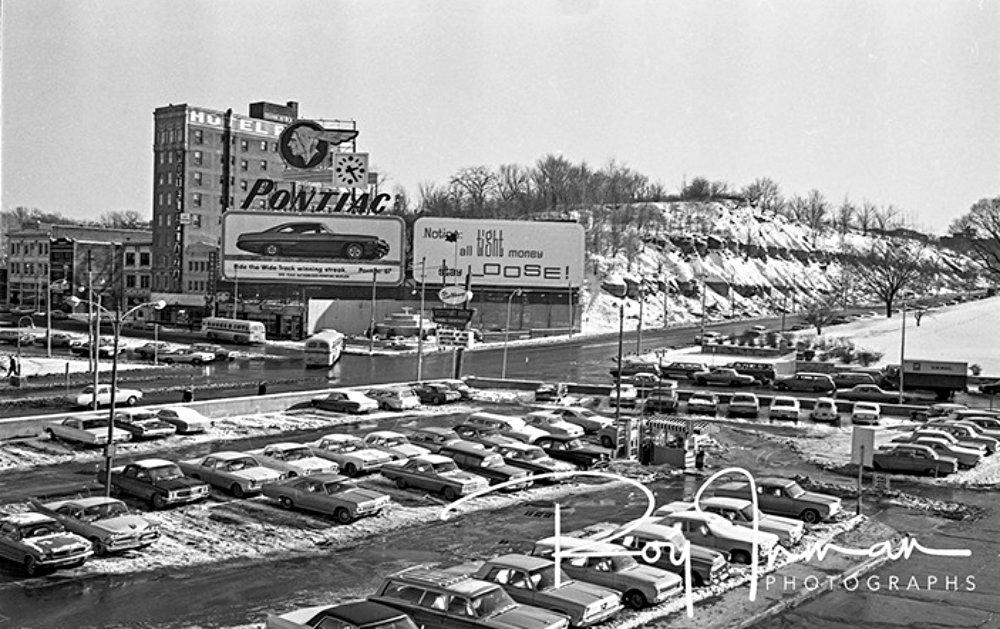