Discuss items in the urban core outside of Downtown as described above. Everything in the core including the east side (18th & Vine area), Northeast, Plaza, Westport, Brookside, Valentine, Waldo, 39th street, & the entire midtown area.
Post Reply
395 posts

Didn't know where else to put this.

I just noticed this a couple of weeks ago. Any idea what it is? Is Laricks the owner of Fresher than Fresh?

EDIT: Google reveals she is indeed the owner of Fresher than Fresh. Well, this can only be good news for the neighborhood. I hope the trailer doesn't go away though...
Top

Sweet Dreams: Little Freshie opens on the West Side


The nouveau soda shop is open from 8 a.m. to 2 p.m. Tuesday through Sunday in the month of May. In the coming weeks, the hours will be expanded to 6 p.m.

KCMax wrote:Sweet Dreams: Little Freshie opens on the West Side


The nouveau soda shop is open from 8 a.m. to 2 p.m. Tuesday through Sunday in the month of May. In the coming weeks, the hours will be expanded to 6 p.m.

Very excited to have this place in the neighborhood. Hate to gripe about hours since I always do and since this place just opened, but I wonder why extended hours would only go to 6PM. I don't own or run a business, so I don't know all of the intricacies of setting up hours, but it seems to me that if a coffee and dessert place were to be open into the evening, the target time period would be following dinner. It would be great to grab dinner in the neighborhood over the summer and then head to Little Freshie for a post-meal snack, espresso, or snow cone. I guess those hours would be designed more to catch afternoon snow cone seekers? I live in the hood, and I guess I'd just like to be able to visit other times than just the weekend. Chezelle has essentially the same hours compared to Little Freshie, as does Genessee Royale, but I'm guessing that most people can't eat between 8AM and when they normally arrive at work. The place looks fanstastic, though, and I can't wait to give it a whirl. It is a great addition to the area.
Top

https://fiber.google.com/
I'm stealing this idea from the River Market people... Westside Northerners... let's pre-register for Google Fiber! This will get free fiber to the schools in the area, the community center, the fire department, and the Hispanic Economic Development Corporation. It says we need 88 people for this to happen.

Also, I never followed up about Little Freshie. This place is fantastic for those who haven't been for a coffee, espresso, or unreal snow cone. Great place to have in the neighborhood.
Top

bobbyhawks wrote: Also, I never followed up about Little Freshie. This place is fantastic for those who haven't been for a coffee, espresso, or unreal snow cone. Great place to have in the neighborhood.

Fact! We've really been enjoying it so far. Somehow went three times the first week it was open.
Top

Has anyone drove by this parcel recently to see if this house is finished? The address is 1748 Madison.

Does anyone know the status of the three "micro-houses" project at 24th and Jarboe? 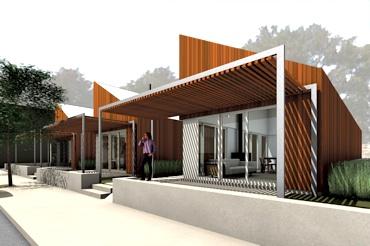 What used to be there.


It is in progress. I don't think it is finished yet--but haven't been by in a month or so.
Top

Meh. The Eldo design's not very good - Studio 804 knockoffs - and the houses that were demolished are part of a housing type that is quickly disappearing from the Westside. Joining those houses together at the back would have been much cooler.
Top

Not finished yet- currently looks like they are laying some plumbing lines or something to the structure.
Top

Yeah -- I think those houses on Rainbow are being done by Urban Coeur. My impression was that they bought the lots planning to build more of those townhouses, then thought better of it. Two houses complete with a third going up. The first two either sold really fast or were built to order.
Top

The shell of this house is up now. I also noticed the other day when I drove by that they are putting in forms for a foundation to build another new house across the street up on the hill across from this house. It's hard to see because of all the trees and brush.


It's the vacant lot north of the house with the greenish roof. You can't access the house by car on Madison, but only from the alley off of W. 18th Street off of Summit.

I also noticed that a new house has been built on the Northeast corner of W. 16th Street and Belleview. It's a one-story modern house. You can't see it on Google Maps yet, but here is the parcel.

so do we have a westside neighborhood discussion thread anywhere? Starting to fall in love with this neighborhood....what do the residents think of it?
Top

I really like how this project turned out. It's by KEM Studio.

The bungalow next door is really nice, too...

KCPowercat wrote:so do we have a westside neighborhood discussion thread anywhere? Starting to fall in love with this neighborhood....what do the residents think of it?

On a side note, I have (once again) heard rumors that some middle-tier priced apartments may be in motion on a parcel near the old West High and Switzer schools. The description was confusing, but it sounded like it would be on the land adjoining the community garden off W. Pennway and 20th (not sure if it would replace it or not). The number of units was more than I expected. This would be a great place for such units that UMKC arts campus students and young professionals could afford to live in. The rumors have been on and off for over a year now, but this was the first rumor I heard without a low-income segment attached.
Top

I think you are referring to the plan promoted by the Westside Housing Organization drawn up by BNIM
to build new housing on that parcel in conjunction with renovated the West Side and Switzer school buildings.


Gloria Ortiz-Fisher, the organization’s executive director, said the plan calls for turning
Switzer High School and West Junior High, which have sat vacant for more than 30 years,
into 98 units of low-income and market-rate housing. The split will be 60 percent low-income,
40 percent market-rate, Ortiz-Fisher said.

The site is along Madison Avenue between 18th and 20th streets. ... I know I probably wouldn't be popular on the Westside for saying this, but I would prefer a more dense residential project on that parcel.

I would advocate tearing down that old school building on the NE corner of the block, and then putting in a below-grade parking garage
with about six stories of apartments on top. This is a large parcel that could incorporate more density than most lots on the Westside,
and would add more residents to the neighborhood and greater downtown.

A six-story apartment building wouldn't be that much different in height than the five-story school building across the street. The grade
of the block would easily allow for the parking garage to be hidden underground. There is enough breathing room around the block
to allow a taller structure, with no adjacent houses that would be severely-affected by the height. The parking garage would also
provide parking for the renovated school buildings across the street.