Tell us more. Why? I like the looks of their first project.

Scratch that. I was thinking cityscape=Cityclub apartments at 19th and main.

Now I see that cityscape did the "Crossroads Westide" apartments, Apex and Summit at quality hill. Yeah, I'm skeptical of their urban abilities. They did one building in the Apex development that looks great (where Spokes Cafe is located). The others all look like apartments from 120th and Holmes. Summit in quality hill is just meh...

The craziest thing is the Spokes building was a late addition to the project and yet it is the best part.
Top

Updating to 5853+93 =
5946 New Units built/planned Downtown
aknowledgeableperson is currently on your ignore list.
You will no longer see any of her posts.
Top

This is the first time I have heard of this proposed development.


The elimination of the state tax credits has already derailed the construction of at least one low-income housing building downtown.

Prairie Fire partnered with a New Jersey company, The Michaels Organization, and submitted a proposal to the school district.

Is Prairiefire the group that completely screwed up the redevelopment of Columbus Park?
Top

I thought Prariefire was the group that completely screwed up the development of Prariefire.
Top

Yes, but they had help from a group that included Zimmer and Larry Maxfield.
edit: and nothing to do with the development out south that is called Prairiefire.
Top

Report: Downtown nears 16,000 apartments — with more on the way

Although Downtown presents plenty of options for renters, the buyer's market is smaller. There are about 1,600 single-family detached units and 744 condo-occupied condo units in buildings with 50 or more units, in addition to a smaller number of units in smaller complexes.

So downtown nears 16K apartments...two years ago. And saying 2,500 people pay between $1000 and $1499 - shouldn't that be 2,500 apartments rent between that amount since more than one person can live in some apartments? I know it's nitpicking, but I have to write stuff like this as part of my job and a poorly-worded report calls a lot into question.
Top

A new downtown report claims downtown population is over 29K and anticipated to hit about 33K by end of this year and near 40K by 2025. Attention Target! 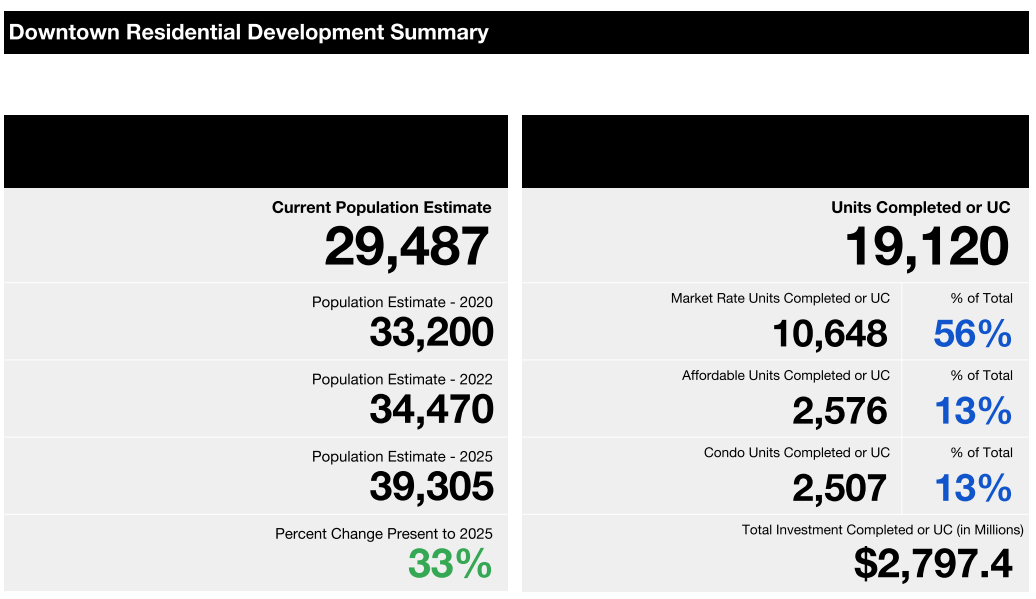