staubio wrote: I wanted to make sure I had a good repository for this kind of information and I want to keep doing regular posts, so I thought I'd start blogging about it. Check out the first attempt on the KC-Clay County-St Jo Interurban Railroad:

My next one will likely outline the impressive old staircases up the bluff in Argentine in KCK. Does anyone know anything more about the history of those?

Love the blog. Keep it up.

The staircases were often built to allow people to go from their homes to streets where public transit was available - streetcars, etc.  Shortcuts I guess.  You should look at old transportation maps to see if that is true for the Argentine.
Top

There's a sidewalk and stairs over off of Cesar Chavez Boulevard on the West side, I think it is Holly Street, where there were houses along the staircase, but no street ran there.
There is no fifth destination.
Top

FangKC wrote: There's a sidewalk and stairs over off of Cesar Chavez Boulevard on the West side, I think it is Holly Street, where there were houses along the staircase, but no street ran there.

Correctamundu, Fang, it is Holly.  It's a housing and access layout that I have only seen in mountain/mining towns like Jerome, Az and Telluride, Co.

In related news, recently a westside old-timer told me that Jarboe, one block east of Holly used to run from 21st street straight down to SW Blvd.  A ridiculously steep grade.  In the late teens a milk  wagon broke loose on the hill, killing two milkmen and a horse.  After this the properties on the north side of Cesar Chavez, from Holly to Belleview, were purchased and cleared and Jarboe Street was filled in and the site leveled to make the existing park.

The cities only involvement was to facilitate the legalities and accept the park as a donation from the neighborhood.

There are some houses constructed along sidewalk/stairs in San Francisco, and that don't front a street.

Macondray Lane is one of them, and was immortalized in Armistead Maupin's "Tales of the City" series. 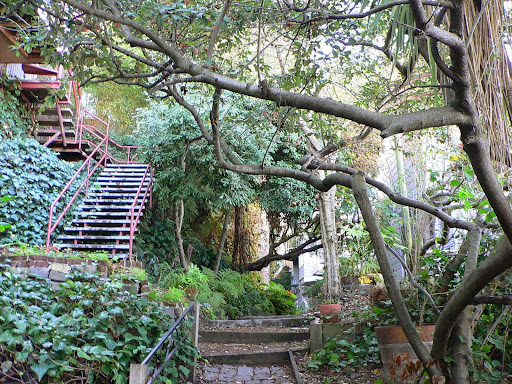 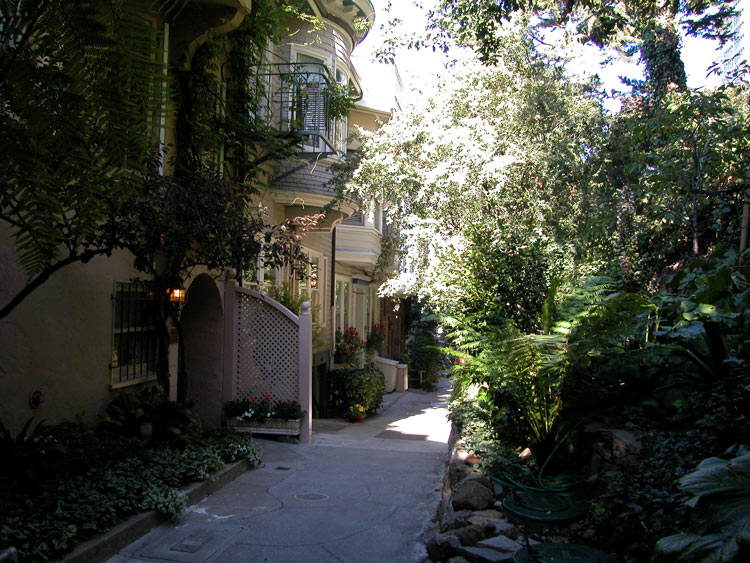 Remember the steps from the movie "The Exorcist"?

Think I am remembering the right movie.
I may be right.  I may be wrong.  But there is a lot of gray area in-between.
Top

The city of Berkeley CA was built with lots of paths.  There is even a group of people who maintain them and lead tours.  Here are some pictures. The cities of Oakland and San Francisco have many too.  These are all cities with hills and most paths were built as shortcuts to streetcar lines.

Cincinnati has some great ones too. Turn a corner and you are in an alley, then around some trees to some stairs, then a little tunnel, then back to stairs, etc. Hilly cities are the most interesting.
Top

PumpkinStalker wrote: The very faint remnants of Webb Castle are off Truman Road right across from Washington Cemetery.  Some stone pillars, a small retaining wall, broken cement slab or two are all that remain.  I've read that all rooms were round when this place was built.

Here is a postcard of it from my collection

Eureka. I have found a photo of the Webb Castle.

Finding that is GOLD Fang. I've never seen a real photo, just my postcards. Even though I spent an hour looking around the site, I want to go back and check out the remnants of the rock walls. The rubble is still mostly there.
Top

I hadn't seen a real photo either. I knew you'd like it Pumpkin. You should go get a print made from the library.

I was looking around the library history site and noticed they had several new photos I had never seen before.  I think they must be slowly adding new photos to the archive.

I am still after the elusive photo of outside facade of Annie Chambers' bordello at 3rd and Wyandotte. I guess I'll eventually have to go down to the City's Landmark Commission's property photo archive and look. Chambers lived until 1935. It appears her building survived until the 1939 property photographs were taken.  The Star reported in 1942 plans to demolish the building, so I think the tax photos exist. Other reports have the building being demolished in 1950.  I wish someone would have had the foresight to have saved that building for posterity, since it was the City's most famous brothel.

I would also love to see the exterior of Cora Totty's bordello at 200 W. 4th Street, the Lone Cottonwood bordello operated by "Mother Smith," and those of Eva Prince, and Madame Lovejoy.
There is no fifth destination.
Top

PumpkinStalker wrote: Finding that is GOLD Fang. I've never seen a real photo, just my postcards. Even though I spent an hour looking around the site, I want to go back and check out the remnants of the rock walls. The rubble is still mostly there.

What happened to the castle to turn it to rubble?  Was it simply abondoned at some point?  Seems a shame, beautiful from the photo and postcard.
Top

Yeah my understanding is that it was used as a haunted house for a little while before falling into disrepair and demolished.  My dad remembers it as a teenager during it's brief stint as a haunted house.  There's hardly anything there, just remnants of stone walls.  Sad, I guess all the rooms were round and was a pretty awesome place.
Top

The photo of the old Webb Castle reminds me of Tovrea Castle in Phoenix.

aknowledgeableperson wrote: Remember the steps from the movie "The Exorcist"?

Think I am remembering the right movie.

I happened upon those stairs one night looking to relieve myself while in DC.

I found some images of Madame Lovejoy and Annie Chambers' bordellos, and have posted them in this thread.

FangKC wrote: I found some images of Madame Lovejoy and Annie Chambers' bordellos, and have posted them in this thread.

Great find, Fang.  I've never seen either of these images.  I had read about Ms. Chambers pagoda styled porch.  It's not what I anticipated.

I'm working on it Loftguy.

Does anyone have old photographs of the Drive In theater on 40 Highway near I 70 and Van Brunt? I heard there was also a Bowling Alley there too? I remember when I was younger seeing the Drive In Theater screens. Just curious to see how it looked back then.
"Architecture is to be experienced by moving through it rather than looking at it."
Top

hmmm. Are you taking about the Heart?
Top

Photos of the Heart Drive-In are here. Be sure to scroll to the bottom to see options.

http://www.cinematour.com/tour/us/7533.html
There is no fifth destination.
Top
Post Reply
165 posts